And the Star Wars Saga continues: A Review

If you haven’t been to see Star Wars VII yet, you might want to pull up those big-boy Depends and go. I invited Hubby Flatbottom (early Christmas present), but he flat-out refused. He shuddered at the very thought of entering a theater with thousands of kids running up and down the aisles, interrupting his movie and blocking his view. It terrified him. He scrunched down in his recliner, clutching the arms, and shook his head. He’d wait for the TV version.

I went anyway and to my unbounded amazement, the Huntsville audience consisted mostly of grandparents with their grandkids. Not the hordes of youngsters that I had expected. Those of us who saw Star Wars back in 1977 (dear God, was it really nearly 40 years ago?), eyes wide and hearts pounding, have returned to the theaters in hopes of feeling that electricity and excitement again. And I, for one, was not disappointed.

The new Star Wars may not be as epic as the 1977 original Star Wars was back in “our” day. It is not a George Lucas film, after all. He recently sold Lucasfilms to Disney for $4 Billion and J.J.Abrams promptly threw out all of the Lucas ideas for VII, VIII and IX. Still, Disney’s The Force Awakens strikes all the right chords—adventure, excitement, battles between good and evil, funny droids, Shakespearean drama and even a tiny bit of romance. The stupendous musical score from John Williams puts us in the right mood from the beginning.

The story line may get a little repetitious (destruction of Death Stars, evil Darth Vader wanna-be’s, and light-saber battles) but the main characters, reformed storm trooper Finn (John Boyega-why did he reform?) and desert scavenger Rey (Daisy Ridley), are every bit as entertaining and interesting as Luke Skywalker, Princess Leia and Han Solo were in the original. That Luke, Leia and Han are reprised, (30 years later) in this film is just a wonderful added bonus for us nostalgic ‘old folks.’

Returning home, I enthused about the film to Hubby Flatbottom. So, on Christmas Day, with the grandkids in distant Austin, and no football games to watch, he hauled out his collection of Star Wars DVDs. And we sat down to a marathon of Star Wars watching. 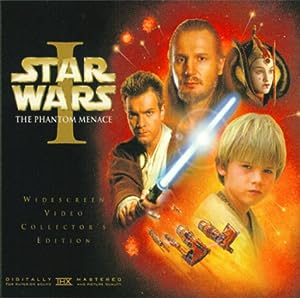 I learned, via Sister Sara’s son, that the original order was IV, V, and VI, (1977-1983) followed by I, II and III (1990s), the much reviled Prequels. To be honest, I had never seen I, II and III, having heard the negative reviews, but Hubby Flatbottom insisted on seeing them, not in their original order, but in their proper story-line order. He plugged in Episode I, the Phantom Menace, and off we went, to that Galaxy far, far away.

True, the Prequels lacked substance, and the acting wasn’t great, but they answered so many questions—as I’m certain Lucas intended for them to do. There were numerous “Aha!” and “So that’s why!” moments, some a little heavy handed, but, in retrospect, helpful. The scenes where Anakin Skywalker descends into the dark side and is finally shredded to pieces by Obi Wan only to reappear as Darth Vader were quintessential, and shudderingly memorable Greek tragedy.

Worn completely out, and with flat bottoms, aching backs and bleary eyes (we aren’t as young as we used to be), we finished four of the six episodes, plus the lengthy documentary. Now, maybe, Hubby Flatbottom will be willing to go see VII on the big screen. Nope, not likely.  Now that the reviews are in, and the grandparents are flocking back to the theaters, there will also be plenty of youngsters to disturb Hubby Flatbottom should he go on a Saturday.