Many people consider On-line Courses the latest and greatest gift God has ever given to mankind. Not me.

Four years ago, our university decided that we professors would have to teach On-line courses. Keeping up with the other profit-making diploma mills like Phoenix University is critical. The on-line courses are highly profitable and huge money makers for the university. They are cheaper to produce, cost the students more, even though they don’t use the campus facilities, and the teachers can work from home. But for the teachers they are far more time consuming, requiring hours and hours of ‘chatting’ with the students on-line. And who’s to say it is the students themselves actually doing the work? 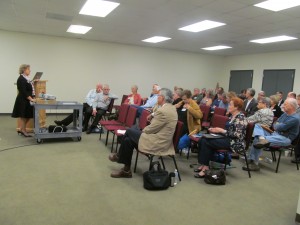 I pride myself on being an interesting and entertaining teacher, even in 200 student auditorium Freshmen history classes. I have the awards to prove it. But all my teaching has always been face-to-face. How on earth can I inspire students if I can’t see them and get their input and reactions? When I was told I would have to go On-line, I quit. A twenty-year career ended.

But like The Blob from the 1960s horror flick, the computer world continues to swallow us whole. We are sucked into the slime, taught to learn by sound-bites and conditioned to an education that lasts as long as a Facebook post, or the minimalist words of Twitter. Only now it’s Instagram and SnapChat and who knows what new methods of communication. Like it or not, we have to slide into the red ooze.

Last week I signed up for a Web course on WordPress, the software that allows us to create web pages. My beautiful web page was designed and created for me by Ken Shipley of Huntsville Techs (thank you, Ken). I knew I was going to have to change things on it, so Ken walked me through the steps I would need to correct and change my site. A year and a half ago.

Unhappily, like learning a language, if you don’t use the information and make the corrections often, the ability is lost. My notes from over a year ago now do not make any sense whatsoever. I can post a blog but beyond that, I am stymied. Hence, the On-line course.

The course is from www.ed2go.com, through our Continuing Education program at Sam Houston State University. It is out of California. It sounded like it would be just what I needed. On my first day, I began working through Lesson 1: Getting Started with WordPress.

In the middle of fumbling through creating a web page, a screen suddenly appeared and took over. In big letters, it warned me not to shut off my computer. I was certain I had gotten one of those dreaded viruses that eat your entire computer and your brain and the National Data Base and destroy the entire World Wide Web. The destruction of the world would be my fault.

At last, I called the phone number listed on the screen. The Indian voice offered to help me clear the screen, IF I would just buy the software package that they just happened to have available. I realized it was a scam. Screaming with frustration (I really did yell “NO!” at the technician and slammed the phone down), I finally shut down my computer. I haven’t tried to restart the On-line course since.

Now, if I had been in a classroom, all I would have had to do was raise my hand. A kindly, helpful professor would have walked over, answered my question, and cleared my computer. What would have been so wrong with that? I’m fairly certain the guy in California doesn’t know or care what I’m up against. But I don’t dare get on the computer to ask.

Maybe I’ll get up the courage to get on-line again next week. I have to! I need to fix my web page!