What is retirement about?

I was deeply saddened to hear that my beloved boss (still young and working at 69) feels that he is being marginalized because of his age. His lifetime of experiences and knowledge is no longer valued by his colleagues. It seems they don’t ask for his advice or listen to his suggestions. He feels he still has something to contribute to his students, at least. But it’s just hard to know that his own colleagues don’t care to call on his expertise any longer.

It’s a sad day when we get the feeling that our Baby Boomer generation is no longer relevant. NOT SO! I believe we are and should continue to be relevant but it’s hard to convince the younger generations of that fact. We may not be the “Greatest Generation”, but surely we still have something to contribute. 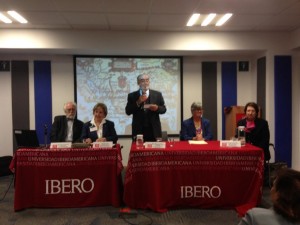 Speaking at the Ibero

remembering to take pictures to post on Facebook. Is success in Social Media the be-all and end-all to being relevant? Lord, I hope not! Those Gen-X’ers still need us to work on Boards and volunteer in the community. But Social Media is hard to overcome.

Some won’t even try.  I was talking to a colleague who is very tech-savy in hardware, but he says he is “curmudgeonly” about going into the Social Media morass. Even my Web designer refuses to get caught up in Social Media.  Some of us are dragged kicking and screaming into this new technological world, usually by our twelve-year-old grandchildren. We feel we have conquered a lot by geting on Facebook to look at the pictures of the grandkids. It’s a start.

I believe it’s also particularly hard for men who retire. One acquaintance was laughing about the husband of a friend of hers who retired and decided he was going to “help” by taking over the shopping. It took him one trip. After buying all the off-brands to save money, and tasting the resulting meals, he decided that maybe shopping wasn’t for him.

TV and Laptop, who could ask for more?

One retiree wanted his wife to sit with him to watch TV all day. Another wanted to follow his wife around to the various activities that she normally participated in. Still another complained about meals and found himself offered the cooking chores. After forty years of doing all the cooking, his wife was happy to relinquish the kitchen to him. They compromised, finally, on his cooking breakfasts.

Retiring requires a whole change in our mindsets and a shift in our relationships with our significant others. In addition to the men having to find activities—there is golf, and poker, and wood working, and traveling, and visiting the grandkids—but that will only go so far—their wives have to adjust to having the husbands at home.

One friend threatened to throttle her husband for trailing around after her. She was amazed that I hadn’t murdered Hubby Flatbottom for sitting and watching TV all day. But, he’s happy staying home to take care of the dogs and cats. I’m happy running off to this activity or that. Maybe it’s role reversal. But I do have to warn him of possible outings weeks in advance or he won’t go.

We’ve learned to adjust to retirement. And I’m good with that.