B.B. Country Mouse and the Benefits of NaNoWriMo and Blogging

For years I have faced writing required chapters or articles or reviews with tremendous trepidation and angst. And I had to write a lot of them. It was part of the racket I was in. Procrastination was always in the cards. When the adrenalin, and fear, finally kicked in, I stayed up late or even all night to get them done. No longer.

Two things have changed my life. The first was NaNoWriMo. The second Blogging. 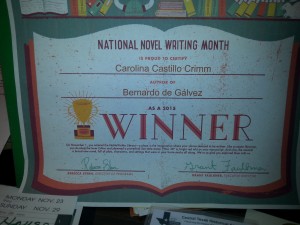 This National Novel Writing Month calls for participants to write 1,600 words a day for each day of the month of November in order to produce a 50,000 word novel by the end of the month. Your prize for finishing? A certificate you can print out and a T-shirt that you have to buy yourself.

I really shouldn’t be catty, but they also require paying the highest priced postal charges available—promising two-day shipping—which isn’t possible because they don’t send out the merchandise until mid-December. I haven’t received mine yet.

I—wrongly—assumed this was some kind of real contest with judges reading our work and someone actually noticing what we wrote. Maybe an editor or agent taking an interest in our style, plot, pacing, dialogue, etc., and offering suggestions. Nope. We could just as easily sit down and write gibberish. To my amazement, only about 11% of entrants actually finish their 50,000 words, and even fewer ever publish.

But all that said, I benefited tremendously. I really did. I learned that faced with that requirement of putting 2,000 words (my goal) down on paper every single day, meant that there was no time for worrying about word choice or editing or polishing or changing. I was forced to just spew it out there and worry about editing later. It worked. I finished. Printed my certificate and bought my T-shirt. Did I say I haven’t got it yet?

The other writing “chore” that I had been avoiding like the plague, was writing a Blog. According to all the pundits, those famous “they”s out there, THEY say we have to blog in order to get noticed, so that we’ll develop a following, so that the agents will take an interest, so that they will pick up our books, so that the publishers will publish us, etc., etc., etc. REALLY? Yuck!

I’ve begun reading other writer’s blogs on blogging. Chuck Wendig blogs constantly and humorously, but beware of his “F” bombs. The Write Life has reams of Blogs on blogging, including a guest post that was particularly good for those of us technological troglodytes over 50. I, again, forgot to capture it, and now I can’t find it. Sorry! All blogging takes is the discipline to sit down and do it. And after NaNoWriMo, a 500 word Blog is like nothing!

In addition, I found a topic I could really care about—my 96-year-old mother. To my amazement, it hit a nerve. It seems there are others out there facing the same caregiving problems for elderly parents. I was able to crank out a daily blog called Elderly Mothers that was part humorous, part poignant, part cranky, but always a great relief to me to be able to express my feelings and just vent. And others read it.

Lately, now that my mother is in Florida with her husband, I’ve had to change my focus to my own traumas and tribulations. Not so easy since I’m not into selfies and self-aggrandizement. But the habit has been established. And I can still sit down to write a daily blog. Don’t know how many people read it, but it’s out there. And perhaps an agent or editor will take note and maybe my friends and family will get a laugh or two out of it.

The best part, though, is that I know I can crank out this 15-20 page chapter without any trouble whatsoever. The book? A Fly on a Texas Wall. The chapter? On Coming to Texas: A Fly on the Shoulder of Stephen F. Austin in Mexico, 1822-1823.

Which I now have to write, so excuse me, gotta go.