Bats in the Belfry—or Not

Last evening, thanks to the lovely and cheerful @VickyClakley, I was invited to join five members of the #ProfessionalTourGuideAssociationofHouston #PTGAH (how does one pronounce that?) to visit the Waugh Bridge Bat Colony in downtown Houston for a FAM tour. That, it seems, now that I am learning the touring lingo, is a familiarization tour for guides who expect later to bring guests in their wake.

A delightful evening began with a salads for supper at the #CaféExpress 1422 West Gray while we waited for dusk. From my five new friends and now colleagues, I learned that there is bitter rivalry among the two major tour guide training companies. All, or most, tour guides are certified and trained in costly and extensive multi-week sessions that are offered by two competing agencies. Mine happens to be from IGA, while my companions are from ITMI. 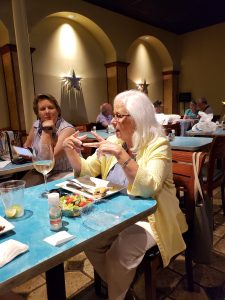 ITMI, the International Tour Guide Management Institute, out of San Francisco, is led by Tom Bravos, while the newer Denver IGA (International Guide Association) is led by Daniel Slater. And never the twain shall meet. A new organization, the IATDG  (the International Association of Tour Directors and Guides) has attempted to bridge the gap and unite all of the tour people under one umbrella. From the gossip, it appears that Tom, resentful of the new upstarts, has scheduled his annual Symposium just prior to the gathering of the IATDG. The smaller the teacup, it appears, the greater the tempest. 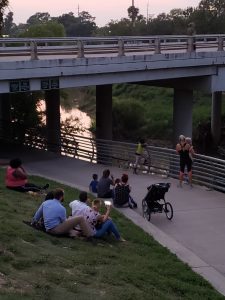 Like Austin with its famous Town Lake Bridge bats, Houston, too would like to lay claim to its share of famous bats. People gather in droves (okay, not so much here in Houston) to view the evening exodus of bats from their up-side-down homes to fly out to feed on flying insects and, in particular, mosquitos!  Go, bats!

It seems that the Mexican Free-tail bats are on a migratory path that includes bat colonies throughout Texas. In Houston, Austin and San Antonio, bridge overpasses are particularly comfy homes for the cave-less bats. They have become a tourist attraction for visitors to all three cities. People gather near the bridges to watch as the bats swarm out in large flocks for their evening meal. So, we, too had come.

According to the signs along the bridge at Waugh Drive, the mama bats give birth to hairless babies in May or June. The babies weigh as much as one third the weight of their mothers, sort of like a human producing a 40-pound baby at birth! The mothers, using their incredible radar-location and hearing skills, can detect their own baby’s cries and smells from among the millions of babies in the colony. 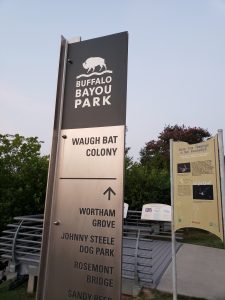 As I believe recall from a Biology report that I did for Mr. Rodriguez some 50-odd years ago at the #AmericanSchool in Mexico City, the babies cling to their mother’s belly fur and nurse until they are a few months old. These are, after all, mammals and even their bat wings have bones much like human hands! Here in Houston, the babies are ready to fly on their own by August and accompany their mothers out to feed on insects in the late evenings.

During Harvey, if you can believe it, their home here at the Waugh bridge was inundated and many of the bats were killed or run off by the rising waters. They are back, however, and we were ready to see the droves of bats emerge for their evening dinner. I did note, however, that down here near the Bayou there weren’t the usual swarms of mosquitoes that accompany night-time, face- and arm swatting outings in Texas. 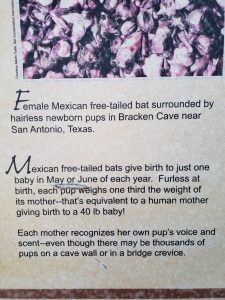 Slowly, the crowd of about a dozen people drifted away as the sky deepened to dark blue and the almost-full moon started its glimmering rise. We laughed and decided that the bat tour was not one we would be bringing tourists to view. Austin could keep its bats and its tourists in safety. We were not any competition at all.

But, never you mind. Houston still has its tunnel tours. San Antonio may have its meandering River Walk with overhanging foliage, lush flowers, quacking ducks, and commodious river barges, where thousands of tourists revel in the many restaurants and bars along its length. Houston has tours of the underground air-conditioned tunnels that criss-cross the city.

By paying the big bucks, you, too, can admire the different floor tiles that change as you pass under each of the buildings on the streets above. You, too, can stare at blank walls, and dozens of snack-bars catering to the employees from the office towers over your head. You, too, can rise up from the nether world to visit the lobbies of a building or two, the Epperson Building or the Shell tower, but, by George! you will tour underground Houston in the comfort of air-conditioning. That, of course, is the operative word here where the temperatures in August hover at 100 plus.

An amazing new world of tours is opening its doors as I follow in the footsteps of my new PTGAH colleagues.