Hallelujah! They’re in the money! 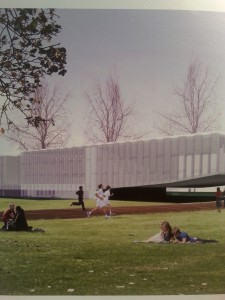 The mystery of the Spanish Deputation from Malaga, Southern Spain, is, at last, explained.  They came, they saw, and they didn’t have to conquer at all. They handed out very nice informational pamphlets,  and they didn’t come begging for money!

The Province of Malaga, and a variety of other groups, plan to spend some $55 million Euros to build a museum and conference center in Malaga to honor the almost unknown Spanish hero of the American War for Independence. Not only has Gálvez and his whole family fallen into anonymity in the United States but, surprisingly, in Spain as well. 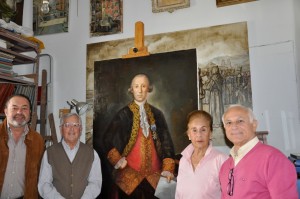 My dear friend, Manuel Olmedo Checa, Vicepresident of the Association of Bernardo de Gálvez in Malaga (that is him on the right with the portrait that now hangs in Congress), has for the last ten years struggled to gain the interest of the powers that be for his unsung hero, Bernardo. Although he hasn’t done it alone, he has played an enormous part in putting conferences together, publishing magnificent magazines focusing on Bernardo, his life and times, and getting Bernardo de Gálvez named Honorary Citizen of the United States. It was also Mr. Olmedo Checa (whom we all affectionately call Manolo) who helped put the members of the deputation in contact with us. Actually, they should have contacted the Spanish Consul General here in Houston, which they finally did. And Consul Enric Panés treated them with the ‘kid gloves’ reserved for the dignitaries they are. None of our muddy little paws involved. Not true. We did meet with them briefly at the Hilton Americas. The representatives from Malaga included the President of the Provincial Deputation of Malaga, Elías Bendodo (governor), Victor González (the Deputy of Culture and Education), Arturo Bernal (the Director of Tourism for Malaga and Costa del Sol) and Antonio Roche González (the factotum). Manolo asked us to provide whatever support we could to make their stay worthwhile.

We offered a deputation made up of our own Granaderos President John Espinosa, Miguel Angel Mazarambroz (Spanish ambassador, retired), Olga Cavia (president of the Casa de España), and your humble servant (that would be me). We had no idea what they were coming for. Naively, we thought they were coming to hear about our efforts with the Symposium on Gálvez. Nope. They were coming to find out what historic items we could provide for their museum.

The answer, of course, is none at all. Well, not quite. As Miguel Angel pointed out, they could put in material on the Apaches for Bernardo’s campaigns against these “First Nations.” Maybe a Texas longhorn (that would be the cattle, not the school) representative of the first cattle drives from Texas to Louisiana to provide meat for Bernardo’s troops. Material on the Caminos Reales (Highway 21 is the Old Spanish Road – OSR) that were used to maintain contact between Mexico City and the vast Spanish empire. Perhaps material on the presidios, such as the one at Goliad, and the soldiers and their uniforms.

The Deputation will also be stopping in New Orleans, Mobile and Pensacola. There they will meet with various mayors, Congressmen, politicians and the members of the Daughters of the American Revolution (DAR) and Sons of the American Revolution (SAR). Those various groups will also be asked for material to put in the museum. As President Bendodo pointed out, all of these cities need to be represented in some way in the museum if they are to attract American tourists.

My question is: are they willing to buy these materials for their collections? They need to hire a Curator of Collections. This person will have to have historical knowledge of the period, an artistic eye for what would look good in display cases, an architect’s view of the spaces in the museum, the ability to beg, buy or steal items from other museums or private collectors, and do it all on a budget. That will be a challenge. I recommended that they visit the J. P. Bryan Museum in Galveston while they are there. Part of the impressive display at the museum includes a section on Bernardo de Gálvez. It isn’t extensive, but it is informative. Of course, Mr. Bryan, and his father have been collecting Texas materials for the last fifty years, something the Malaga museum has yet to do. But they are going to have to start laying out the bucks now.

How does one buy historic artifacts for a museum? Go on E-bay?