PBS has certainly hit it big with its program on Downton Abbey. 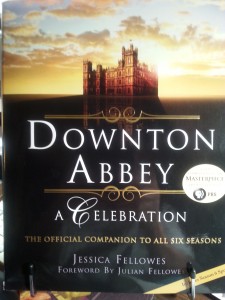 It is fascinating to see how a TV show can become so popular. Even Julian Fellowes and the members of the cast and crew didn’t expect it to “go viral” with world-wide syndication and translations into dozens of languages. What is it about the members of an aristocratic British family and their servants that hit such a nerve? It is a phenomenon that other authors, writers, and TV producers would give their eye teeth to emulate.

Knowing I was hooked and had been avidly awaiting this next (and sadly, last) season, Hubby Flatbottom blessed me with the perfect anniversary gift—Downton Abbey-A Celebration, the “Official Companion Volume” to the series. It is the first in what, I’m certain, PBS and author Jessica Fellowes will make into a lengthy and profitable set of books to accompany their TV show.

At only $30, this collection of magnificent photographs alone should easily have cost $50, $70 or more. Printing color photographs is not cheap!  Many publishers send their books, especially those with lots of photography, to China in order to keep the costs down. I don’t think that was the case here. St. Martin’s Press does not do that, thank goodness. The Chinese are getting enough of our business as it is!

Jessica Fellowes, the author of this and other books on the TV show, is the niece of writer Julian Fellowes. Through him, she gained access to the sets and the characters, the directors and producers, even the camera men and technicians. She provides behind-the-scenes details, interviews with cast members and entertaining tidbits about the program. In this book, she “explore[s] the house, the people who live within it and how their lives have changed since we first met them.”(p. 25)

Divided into four segments, ‘At Home with the Family,’ ‘Behind the green Baize Door,’ ‘The Estate and Village,’ and ‘Beyond the Boundaries,’ the author uses the various rooms and locations as a framework. She pairs each room or space with a particular character. After describing each room and how it is used during the show, she includes a more in-depth article about each one of the actors.

As a fan of the show, (after missing the first three seasons, I went back and binge-watched all of them in order), it was fun to remember certain episodes that Fellowes mentions. I wanted to go back and watch them again—in order. If you aren’t a fan, don’t expect this to be a recap of the show. There is a brief section at the back that covers each of the seasons, episode by episode. 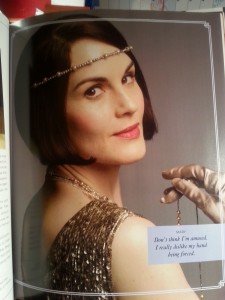 The writing is lovely. What British author isn’t? It is, at times, florid and heavy on the adjectives. It is also a hodge-podge of information. The author randomly skips around, back and forth throughout the seasons, mentioning a scene here or a comment there. It made me feel like the book was a jumble of facts all stirred together and arbitrarily dumped into the four sections. Still, if you are a fan, the book is well worth the price. And the photographs are wonderful.

This isn’t great literature but it will make an entertaining coffee table book long after the show is forgotten.