My 96 year-old mother was as close to tears as she ever gets. I had gone out to check on her after getting back from Houston at 10 o’clock at night after a meeting and dinner that made me late getting home. She was distraught and had evidently been sitting and worrying for some time. 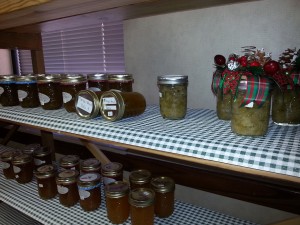 “I tell you what,” I told her. “You can come help sell jelly at Granny’s Kitchen at the church in the morning.” That idea delighted her, although she had hated having the jelly jars in her house and had insisted that they be moved out as soon as possible. I figured she could see where the despised jelly had gone.

She was ready bright and early. She had fixed her own breakfast, in the blue bowl so it didn’t spill over in the microwave, and with papaya that she cut up without cutting herself. No bread or butter, toasted or otherwise, and no jelly. She is worried about getting fat.

At the church, I let her out in front. The minute I joined her, she began two-cane-stumping toward the front door at an alarming rate. She started to tip forward and I finally reined her in. “It’s okay,” I said, realizing what she was doing. “You don’t have to prove you can keep up with Al.”

Inside, the jelly was already set up on the shelves ready for sale, something I had been planning on doing, along with breads and cookies and all sorts of delicious baked goods. When I offered to buy some for her, she insisted she was getting too fat. She wasn’t interested in any of the ‘sinful’ goodies on display.

We had also arrived too early. There wouldn’t be any customers for at least an hour. I introduced her to my church friends, hoping she would sit and socialize for a while. Nope. She stumped around, looked at everything on display, and decided she was ready to go.

I suggested taking her grocery shopping. Another good idea. When we got to Wal-mart (According to Hubby Flatbottom, “If Wal-mart doesn’t have it, you don’t need it”) to my utter amazement, she decided to use one of the electric carts so she could sit and shop. She must have worn herself out ‘proving her fitness’ at the church.

She figured out the controls in no time and soon she was zooming around in her cart. It’s a good thing it was early, and it’s a good thing those carts don’t go terribly fast. She only backed into three people and nearly ran over two others. Without a list, however, there wasn’t much to buy—oatmeal, papaya and marshmallows for the Thanksgiving sweet potatoes we are taking to Sister Sara’s. 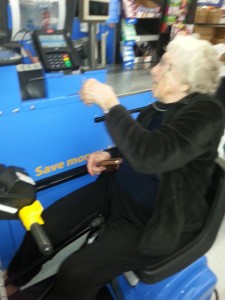 Swiping from the cart

At the check-out counter, she got out her famous ‘little red card.’ Swiping for Mom is a challenge. First she had to figure out which side to swipe. Then she slid it ever so slowly through the machine. Thank goodness, the check-out clerks at Wal-mart are used to the elderly. While I grimaced facial apologies and mouthed ‘Sorry!’ to the people behind us, the young man came around and helped her.

Laboriously, she punched in the pass code that is written on the back of the card. I realize that is a no-no, but for her, remembering all those numbers is not even an option. It took two tries to get the numbers in correctly. Just to complicate matters, she asked for cash, $50. They don’t do $50. Only even numbers. At long last we got the groceries, the cash, and the receipt and she buzzed out of the store. Did she want to go back to the church to sell jelly? Nope. Home. And she wasn’t in the least bit teary-eyed over missing me.

Now, my primary fear is that she is going to lose her card, with the pass code on the back.