And here I was worrying that I wouldn’t have anything to blog about. What was I thinking?

Of course, I should have known she would come through in the clutch. And she did. This evening, at nine o’clock at night, after I had just returned from an exhausting 2-hour drive back from Houston, Mom decided she needed to go to the grocery store.

I had come out to the trailer to check on her and make sure she had eaten. She had fed herself a frozen TV dinner and her burned beans. I was (I thought) keeping her company and

watching one of only two TV shows that I watch regularly. Perhaps the fact that I had been late coming back from Houston and hadn’t fed her, or that she was watching the TV show instead of paying attention to her may have set her off. That’s when she decided she had to have her groceries right then. In the middle of my TV show.

Now, as a calm, rational adult (didn’t I claim to be acting as the parent?), I should have peacefully and pleasantly said, “Mom, nothing on your grocery list is so urgent that it can’t wait until tomorrow. I’m tired and I’m going to bed as soon as this show is over.”

But no, of course not. She had that tense angry sound—you know the sound—not explicit, but you can always tell. And you ignore it at your peril. “Wal-mart,” she informed me, “is open 24 hours a day!” And she had “a list and I’ve been waiting three days to go to the store!”

Now, mind you, I had only been gone overnight, not three days. The OC (Other Caregiver) had been here if there was anything on the list that she needed desperately. I had also offered to get her groceries this morning after church. That wasn’t good enough. She wanted to go. And she was sounding really cranky. My subconscious, obedient, subservient child-brain kicked in. “Yes, Mom, I’ll get the car.”

Thinking back on it now, I could have said no. Now, in our family, we never ever yelled or screamed or expressed any such improper emotion. It just wasn’t done. We obeyed and we kept our mouths shut. We could sulk all we liked, which I immediately reverted to in the car on the way to the grocery store, but we didn’t admit to being angry.

Mom, of course, content that she had gotten her way, was perfectly willing to chat about the program that I had just NOT gotten to watch the end of. I nodded and grimaced and pretended I wasn’t really angry. 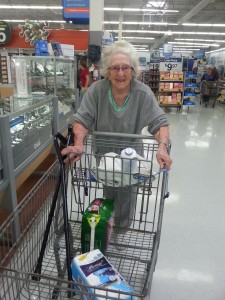 Wal-mart is a very large store. And Mom, leaning on the grocery cart, moves very slowly. And of course she wanted a measuring cup with ounces on it (the OC had inadvertently hidden the perfectly good Pyrex one I had been using for jelly-making); then a shoe horn from the shoe department in the back of the store; then new light bulbs (the OC doesn’t like the twisty ones Mom has) in the far, far distant hardware section; and a lamp shade that clips on the round bulb in the middle of the store (they don’t have them). Anyway, you get the picture- back and forth across the store at a snail’s pace, at 9:30 at night, ticking on toward 10:00 p.m. and I’d been up since 4 am.

Finally, three gallons of Blue Bell ice cream, which she has never bought before since it is too expensive, but the OC says it is best, so she bought it. And finally, since she “might not be able to get to the store again for a long time,” two gallons of milk. Gotta get that dig in.

When we finally got back home, she insisted “I can carry the bags in!” While I brought in the rest of the bags, she fumbled up the stairs to the trailer with her two canes and a too-heavy bag. I finally took it away from her.

Perhaps, she’ll remember where she puts them.  And I’ll have to apologize tomorrow.