And a good day was had by all.

Sunday Mom had the energy to get up after our outing on Saturday. For which I am grateful. Even when she called at 6:30 am to ask if I could take her to her church. She wanted to say goodbye to all her friends before leaving for Florida in seven days. That memory is not one she is forgetting. She may forget everything I say or do, but she knows she’s ‘outta here’ on December 1st. 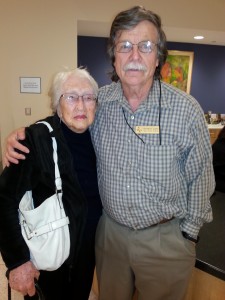 Richard, the ride to church

She planned to call bff Richard from the library to take her, as he often does, but I offered, as soon as I finished my blog.  An hour to finish writing, an hour to dress and I drove the car around to pick her up at nine. We arrived at her Unitarian church at Thoreau Woods at about 9:10. Nothing in Huntsville is very far away, but there was no one there.

At first she thought I was going to just drop her off in the cold to wait on the steps of the church. I assured her I wasn’t. Just then her dear friend Beth drove up with a key to the church. Beth let her in, and told me the whole church had been invited to a graduation recital at the university by their young piano player. Many of the local churches help music students with scholarships in exchange for their playing for the church on Sundays. I hurried off to my Sunday school then cut church to come back and take Mom to the recital.

Mom has always enjoyed music. As far back as I can remember she has plunked away at the piano. 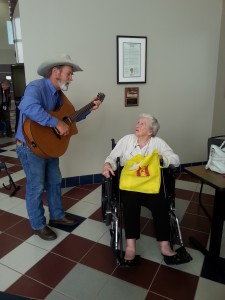 She and my father tried to interest us in music. We even had a family ‘band’ that played “Over the Waves” with a funny, fat, elderly Mexican conductor who struggled mightily to teach us music. My Brother Joe learned the clarinet, and Sister Sara joined the school choir. I tried the violin but at the school recital I lost my place and just sort of sawed back and forth with the bow in the air pretending I was playing. Not my finest hour.

When Mom moved here we bought her a keyboard. I brought her the hymnal from the church and several of pieces of music she liked. After K.R. Wood played Moon River to her, she wanted to learn that on the piano as well. She plays occasionally, enjoying the effort even if she struggles to get through the pieces. I have heard that music is good for memory building, especially for the elderly. I haven’t suggested that should be the reason to play but it sure couldn’t hurt. I picked Mom up just as their church let out and we drove over to the magnificent James and Nancy Gaertner Performing Arts Center. Andrei Chelaru, a 22 year-old Rumanian student, has been attending Sam Houston State University for four years. This was his graduation recital in which he performed music he had composed.

The performance included his own piano pieces (Scenes of the Slavic Soul), a composition for a quartet with flute, saxophone, viola and cello, a beautiful piece for a soprano, and then a fun Jazz Suite. The variety of styles and the changes in his composition from his earliest works in 2011 to the present was fascinating. Of course, he received a standing ovation at the end. Admittedly the audience was all friends and family, but he still did an excellent job.

If music soothes the soul, (or is it the savage beast?) then Mom was indeed soothed. I got her home and we had pot roast and vegetables–with buttered, broiled bread which she didn’t turn her nose up at—and pumpkin pie.

She even let me watch my TV program in peace. Blessings on music.