Elderly Mothers and the Benefits of Memory Loss

Mom has always been an avid reader. It’s where I learned my love of books, I guess.

As I mentioned previously, she has the entire set of Lee Child’s Jack Reacher series. She threatened to throw them out, sell them off, get rid of them, but since I haven’t acted to carry out her mission, they are still sitting on her dresser. She picks one up and slips into Reacher’s world with avid regularity, a new book every few days or so. They are her escape.

Mom has always had unusual reading tastes. Over the last fifty years or so, she would find one particular philosopher or author and become enamored of him or her to the point of obsession. She then insisted on sending each of us kids copies of her latest inamorata. Eckhart Tolle comes to mind. I think I still have three copies of his The Power of Now and A New Earth: Awakening to your Life’s Purpose.

According to Wikipedia (the source of all knowledge, of course) Tolle is “the most spiritually influential person in the world” thanks, I think, to his appearances on Oprah. Perhaps Mom isn’t alone in her infatuation. She hands out her precious copies of his books to anyone who takes an interest and does her best to convince them that this is the book that will change their world and save their lives. We’ve reached the point where we just say, “Yes, Mom, of course I’ve read it.”

Sister Sara now brings her the latest in esoteric philosophical books. A while back, thanks to Sister Sara’s influence, Mom  launched into Vipassana, claiming it was the answer to everything. Before that, while we were teenagers, she was working on her doctorate. It was T-Groups and the Esalen Institute and Fritz Perls. All of us kids were required to absorb the meaning of Perls’Gestalt “prayer.”

“I do my thing and you do your thing. 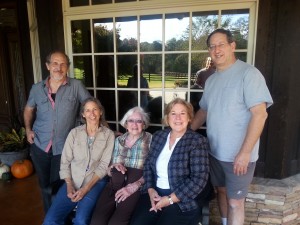 Remember, it was the ‘70s. Can you imagine this philosophy with teenagers? Can you say ‘lack of discipline’? It’s lucky we turned out as well as we did—no drunks, drug addicts or jailbirds.

Now that she has mellowed, and because she refuses to collect books, we visit the library regularly. I’m sure she becomes highly conflicted when we pass the bookshelves where there are books available for only .25 cents for paperbacks and $1.00 for hardbacks. Sometimes she indulges and buys one if it catches her eye, but it comes back as soon as she has read it.

She has also gone back to books from her youth. She recently wanted a copy of Montaigne (I don’t know why) and the library didn’t have it. I ordered it from Amazon (like Hubby Flatbottom, I have them on speed dial, or the internet equivalent) and she had it within two days. She reads it laboriously, forgetting and rereading, forgetting and rereading. 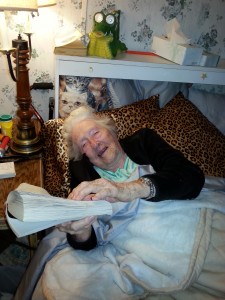 She has also started rereading historian/philosopher Will Durant, exclaiming over his beautiful writing. And then she wanted a copy of Plutarch’s Lives that her father had suggested she read when she was a teenager. She said she hadn’t done it then, so she needed to do it now. Let’s see, that would be back some eighty years ago in about 1934. How did she even remember that?

But there are great joys in a slowly slipping memory. She calls it ‘senility’ not the more threatening term ‘dementia’ or ‘Alzheimers’ (I still don’t know the difference). She can now read—or reread—her Jack Reacher novels and not remember them at all. Every story is new again. And that’s a good thing. Unless Sister Sara gets hold of them, those 20 books ought to last Mom long into her twilight years.