Elderly Mothers and the Neighbors

As you can tell from our efforts yesterday, Mom is a very sociable person.

In the piney woods

Living out in the country means neighbors are important. Restricted to the trailer out here in the East Texas boonies, she wants to know her neighbors. The problem is, we don’t have many and getting to them is becoming difficult.

When Mom married my father and moved to Mexico City, she did not ‘speeka de Spanish’ which restricted her life considerably. Her one friend was a woman named Uli Hunter, an American who lived in an apartment across the street from her in downtown Mexico City. The only problem was that the woman was an alcoholic, which meant Mom had to be less than hospitable with the liquor, and help her back across the street on more than one occasion. 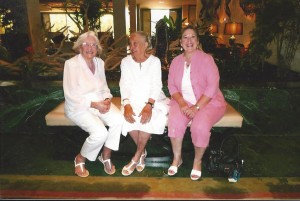 Mom and Martha and me

Later of course, after Mom and Dad moved out to Coyoacan, a southern suburb of the city, she made numerous friends, in particular her beloved three M’s-Martha Gottfried, Martha Sauer and Mary Ann Hendricks. All were neighbors, not right next door, but close enough, and all with kids the same ages. Mom and her friends visited each other’s homes on an almost daily basis, sharing hobbies like painting, bridge and the Junior League. We kids went, too, forming life-long friendships.

As Mom and Hubby Al have moved up and down the East coast, renting rooms in peoples’ homes rather than owning their own, they have also built up friendships. Al, who continues to ‘run the roads,’ has numerous tennis-playing buddies but Mom has lost track of most of the friends she had made. That has made her lonely.

Making friends out of neighbors is in her blood. Getting to them now is the problem. Two years ago, when she was still mobile, she made friends with Ramona, up on Helton Hill, our back-yard neighbor, 3 miles away across a 40 acre cattle pasture. She did have Ramona over for tea and Ramona remembered her when she came back from Hawaii with a cute little sand-bottle. Wayne, a musician, lives only a mile away through the woods, down the dirt road. We went to see him do a Christmas presentation at the nursing home here in town. Unhappily, he isn’t often at home because he usually lives in Belize at his hotel.

Yesterday, I drove her over next door, a quarter mile away.  Jewel Taylor and his wife are always happy to have company. He is a very, very gregarious retired Sheriff’s deputy from Harris County and she a stay-at-home mom. They have just bought the 400 acre deer lease next to us, as well as several large tracts along Highway 75. He rents winter leases to his deputy buddies who come hunting next door. I kinda worry about bullets zinging through our house, but we haven’t been shot yet.

When we got there, I realized Mom is going to have a problem socializing. She couldn’t hear Mr. Taylor’s unending stories. Even inside, sitting in their living room, she couldn’t really make out what he was saying. Mom sat, completely uncomprehending, while Jewel talked, and talked, and talked.

It wasn’t a philosophical discussion, either, or a discussion of the mayhem and bloodshed currently going on, which Mom can become very vocal about, or Eckhart Tolle or any books Jewel might have read—he hasn’t. Read any books, that is. He talked about his illnesses, his knees, his injuries, and no longer being able to go to Lake Charles gambling, or to even get into his new truck since he couldn’t pull himself up into it. He had to buy an older truck that he could step into.

I suppose illnesses are the standard topic of discussion among the elderly. Mom’s problem is that she doesn’t have any. She takes no medications and doesn’t remember her recent hospital stay with the GI bleeding. Perhaps that’s a good thing, but it gives her a limited range of conversational topics among the elderly neighbors.

Mom says she is going to call Ramona. Maybe they can talk on the phone, about . . . illnesses?