Elderly Mothers and the Remote

Not so many years ago, turning on a television consisted of getting up from the couch, walking over to the TV and either pushing a button or twisting a knob. Such a thing is no longer possible. If you are lucky, you’ll find the On-Off switch hidden along the edge or on the back or behind some little secret panel. A remote, therefore, is essential. Not a good thing for my 96 year-old mother.

The terrors of modern technology.

Mom has discovered television—satellite television. It’s not that she didn’t watch it before. She and hubby Al watched a small portable TV in bed, while eating supper. (Kept the cockroaches happy, I’m sure). They didn’t have to worry about a remote because it was an old TV with a proper knob to turn it on and off. She could even crank it up loud enough to hear (about 100 decibels) when Al wasn’t there. Al wears cotton in his ears to block out noise, painful for him at 60 decibels.

I will be the first to admit that remotes are not easy to use. They are not self-explanatory or logical. My husband, known in some circles as “Flat-bottom” for his 15-hour days of non-stop TV watching, is a technological whiz. He has remotes for the TV, the satellite, the surround-sound, the DVD, the BlueRay, the HD, and I’m not sure what others. It takes four remotes to just turn the TV on. He doesn’t understand my mother’s 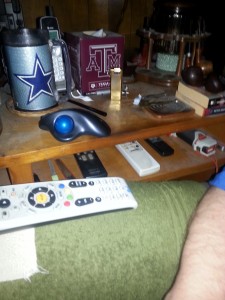 Flat-bottom’s four remotes, all necessary to turn on TV

I have carried out extensive training with Mom on the four basic parts of the remote—‘on-off,’ ‘channels,’ ‘mute,’ and ‘previous.’  Again, and again, and again. But then there is the ‘Guide’ and the up and down arrows and ‘Select’ and punching in the numbers and – “Wait! Don’t punch that!” “No, hold it down longer.” “No, not that long.” “See the lights?—the blue lights?—Wait  until they go off.” “No, the VIZIO has to turn white, not orange.”

And then my sister decided Mom needed to do QiGong, some kind of Buddhist exercises. We added a DVD player in the bedroom. Another remote. More instructions. “Put the DVD in here.” “No, the other way.” “Now push the Play button.” Stares at the remote. “Now how would you Eject the DVD?” Stares at the remote. Okay, never mind Fast forward and Reverse. 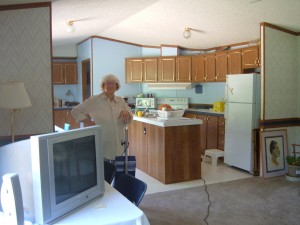 This last weekend, I had to give a presentation in Central Texas and left Mom alone. Trapped in the trailer with no one to talk to, she had to face the dreaded remote by herself. Jack Reacher novels can only last so long.

I returned to find that she had conquered the remote, for now. She’d gotten her full quota of entertainment, religion, politics and sports—by herself, with the remote. Sunday Morning with Charles Osgood, then John Dickerson, two preacher’s shows, and a football game. She also watched Australian Rugby (?!), the Comedy Channel, PBS, and some strange channel up in the 300s. Don’t know how she got up there.

The QiGong DVD? We aren’t quite there yet.