Elderly Mothers and their Caregivers

It’s not that we don’t trust her to feed or care for herself. As Mom told my cousin in a phone conversation the other day with considerable vehemence, “I’ve been feeding myself for 96 years! I’m perfectly capable of taking care of myself!” 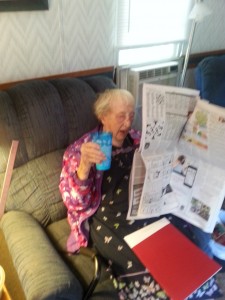 Waiting on breakfast, reading newspaper and, of course, Jack Reacher

True, she has and she is, but how do you tell someone they have become feeble and forgetful? We would rather she didn’t burn the house down when she puts the thick slice of buttered Italian bread in the oven, with the broiler on, and forgets it? Admittedly, Mom was talking to Sister Sara on the phone when she did it, so it’s not all her fault.

Actually, it’s practically a family tradition to forget things in the kitchen. When we lived in Miami, (without a maid for the first time since leaving Mexico), there was a deep-well in the ancient stove, kind of like a crock pot but actually built into the stove with a burner underneath. Mom would put pinto beans in to soak “overnight.”

Busy with her doctoral work or the demands of teaching 5th graders or caring for us four kids, she would forget them. Out of sight, out of mind. Two or three days later, one or another of our friends would come into the house and ask “Did someone forget the beans again?” We kids had become so inured to the pungent scent of putrifying beans that we didn’t notice. 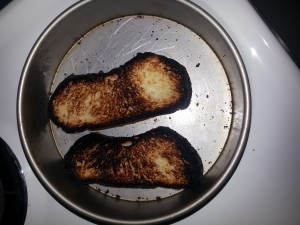 And burning toast was an almost daily occurrence. We had no toaster and  Mom used the broiler in the oven. With the door closed, the toast was easy to forget.  The scent of burning bread would send us all leaping for the oven. Scraping charcoal off the bread became a habit. Seems that it still is since Mom likes her bread and butter broiled and Sara or I forget it while we’re fixing the rest of the breakfast.

So we insist on having one of us with her as much as possible, at least at meals. When I am gone on one of my various speaking engagements, I call on Sister Sara to come up from Seabrook to care for Mom. It’s even worse when Sister Sara can’t come and I round up my entire Sunday school class, strangers to Mom, to come “visit” three times a day.

The implication, in my mother’s mind, is that we don’t trust her. She feels that we see her as incompetent and unable to care for herself. That she has become feeble and forgetful, no longer the vibrant, successful being that she once was.

No one likes to feel less than they once were. We won’t like it when we get old, I’m sure. How do we convince the elderly that they simply can’t do what they once did? Hubby Flatbottom, once an active ball player, says you know you’re through when they quit asking you to play on the team. Mom is still on the team, but she is more bat-boy than pitcher now. 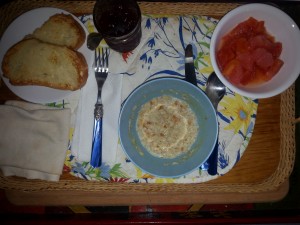 So, I continue to bring her meals on a tray when she stays in bed with Jack Reacher. (Who wouldn’t want to be in bed with him? 6’5” and 250 lbs of male muscle—Mom is old, not dead! She still remembers. And she misses hubby Al.)

And cousin Becca assured her that we just wanted to enjoy being with our mother. Well, actually, not.