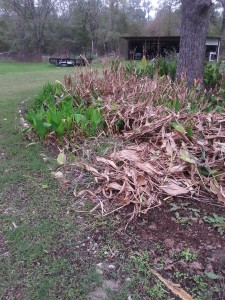 Yesterday afternoon, I came into the trailer to find Mom bandaging up her leg with a piece of paper towel and scotch tape.

Mom had been out cutting away the dead leaves of the cannas at the suggestion of the Other Caregiver (thank you VERY much!) who had mentioned the unsightly nature of the plants. The OC had promised they would clear out the underbrush the next time she came up. Mom may have been feeling that a) she wanted the grounds to look beautiful, or b) that she needed the exercise, or c) she was worried that the OC had disapproved of the yard. She took it as a call to arms!

When I came out and found her sitting in her painted plastic chair amid the plants, leaning over and cutting away at the dead branches, I asked her what she was doing. “What does it look like?” she says. I wanted to mention that I pay the gardeners to do that, but it wouldn’t have done any good. She was determined.

By the time I returned from my errands, I found that she had managed to scrape a patch of skin off her leg of about an inch by an inch. It was bleeding and oozing nicely. “Oh, it’s fine,” she said with a dismissive wave. “It’s only a layer or two of skin. Happens all the time.”

Several months ago, returning from Brother Joe’s Sand Art concert in Houston, she had tried to get out of the car too fast. I had asked her to wait while I got the porch light on, but she must have been desperate to get into the house after the two-hour car ride. Before I could reach her, she had fallen over sideways onto the long stones that edge the pathway.

I helped her into the house and when she got her shirt off, there was a strip of skin peeled off her upper arm nearly three inches long. “Here,” she says, handing me a pair of scissors. “Just cut off the flap.” Hesitating, and feeling a tad queasy, I did as I was told. No emergency room, no stitches. We bandaged it up, and ever since, she has had a bad scar on her upper arm that itches and reminds her of the experience. She tried to tell me about it as though I hadn’t been there.  I didn’t remind her that I had!

This time, thank goodness, there was no flap of skin, but it still needed tending. “Where is your first aid kit of bandages and pads?” I asked. No telling. She couldn’t remember. But the lack of bandages triggered another run to the grocery store. At least this time it wasn’t at nine o’clock at night. 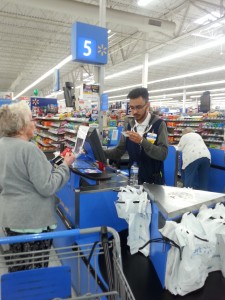 Returning with the essentials – Neosporin, bandaids of various sizes, gauze pads and tape—she patched herself up while I unloaded the rest of the groceries. There were, of course, several things she had forgotten the night before in her rush to secure a trip to the store.

The problem with the elderly, as those of you who are caring for your relatives know, is that their skin becomes very thin and fragile. The slightest bump or bruise will break the skin, leaving terrible looking abrasions. They aren’t wounds that can be sewed up, and a trip to the emergency room really doesn’t result in any more than bandaging. Or so Mom believes.

Sometimes I appreciate the pharmaceutical industry. Curad and Band-aid and several of the other companies have come up with bandages that don’t harm elderly skin. I don’t know how they work, but it is a blessing. Too often we try to remove a bandaid from these wounds and peel skin off with it, leaving raw red marks on our elderly parents.

Now, thank goodness, you can buy the bandaids for sensitive skin. I recommend them. That is what we got for Mom. If she’s lucky, this time she won’t have a terrible puckered scar from my having sliced off her skin.