Elderly Mothers and Use it or Lose it

Steve, the second good-looking Physical Therapist from STAT Home Health Care came back yesterday. Since it was Nathan who tested Mom’s abilities last week, Mom had to go through the same lifting and pushing exercises again to show where she is in terms of flexibility. Again, thanks to her desire to impress the fine-looking therapist, she did very well.
My cousin, who was with her at the time, was also impressed. She has an almost-equally elderly mother-in-law who has arthritis. Her mother-in-law hurts if she just lifts her arm which makes getting her in and out of clothing tremendously difficult. Mom, although slow-moving, can at least still move around and dress herself.
The good-looking Steve (are they good-looking because they are young or because Mom just appreciates a well-cared for, under-thirty body? – I think the young part has a lot to do with it), anyway, Steve left a sheet with all sorts of exercises that Mom is supposed to do. She has done exactly none of them.
Cousin B was avid to get Mom up and exercising. After considerable encouragement, and after meals when Mom was already up anyway, they walked the long corridors of the Residential Facility. But when it came time to do the exercises on the sheet, Mom balked like an obstinate mule. She wouldn’t, couldn’t, didn’t have the energy, didn’t want to. There was no need for excuses, she just didn’t. No encouragement would get her going.
I did forget to mention in the last blog on exercising, for which I abjectly apologize, that Mom did compete. There are a number of different competitive groups in swimming. The Masters are groups of athletes, mostly elderly folk, who run or swim or compete in track and field or almost any of the usual athletic events that draw competitiors. Another is the Senior Olympics. Although I believe they are prohibited from using the trade-marked term Olympics, they call themselves the Senior Games. I’m sure there are others. Especially as the Baby-Boomers top fifty. 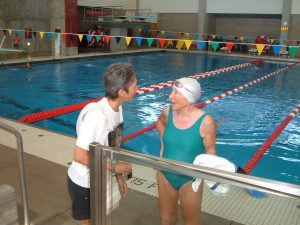 For Mom, it was swimming in the Senior Games. The avid aficionados for both the Masters and the Senior Games are often busy recruiting at most of the swimming pools. They always need new members and new competitors for their “games.” They stand pool-side, stop-watches in hand, and time the swimmers to see how fast they are. The speedy ones are encouraged to sign up to represent their state or county.
Mom, inevitably, came up in the top tier of swimmers. The problem was that she was always on the move when she was with Al. Since she swam in Florida in the winter and in Virginia/New York/Rhode Island/Pennsylvania/Massachusetts or wherever in the summers, the problem of having a home state from which to compete proved to be a problem. I believe that most of the time, she registered to represent Florida.
When one enterprising journalist interviewed her, she wondered about the friend who had beat her out for the 1936 Olympics. Where was she? Was she still swimming? Was she in Florida? The reporter learned that her friend had passed away and Mom was left alone at the pinnacle of her sport.
The competitors for the Senior Games are divided by age category. For the last twenty years (from the time she hit 70), the competition in her age bracket has been limited to perhaps one or two other swimmers. She, and the other one or two, competed in the races with the younger age groups. Mom won handily against the 60 to 65 age group, the 65 to 70, the 75 to 80, and so on. As she has aged, the number of competitors has dwindled and the number of victories has increased.
By the last time she competed five years ago, at the age of 95, there were practically no competitors in her age group left, so she swam against the youngsters in their 80s and even 70s. She beat Mark Spitz’ 1972 record of 7 gold medals and was on track to defeat Michael Phelps’ records as well. No, she hasn’t swum against any sharks.
Regrettably, the competitive spirit flares only occasionally now–usually when there are good-looking young men around. Once Steve is gone, however, when we encourage her to do Steve’s list of exercises or participate in the stretching, weights and bands class, she whines and complains and stubbornly refuses. She reminds me of myself when she used to chase me around the edge of the pool in Mexico to make me get in the frigid water to swim my laps. It happened, but grudgingly.
At least my cousin can get her to walk.