Last night, I watched Mom hobble, stoop-shouldered, tottering and swaying, from her bedroom across the kitchen to her chair in front of the TV, collapsing into it. No longer straight-backed, no longer firm of step, no longer strong and confident, she reminded me of the pictures we’ve been seeing of the elderly WWII and Vietnam Era Veterans. What must they have been like in their heyday? The yellowed and crumpled pictures don’t do them justice.

For 96 years, Mom has been as athletic as it was possible for a proper, mother of four, bridge-playing Junior Leaguer in Mexico to be. As I’ve mentioned before, she was raised in Miami where she swam for the Miami High School swim team. In 1932, she competed for a spot on the U.S. World Olympic swim team to be held in Berlin, Germany.  One of her fellow teammates beat her out by ten hundredths’ of  a second. It is still her main claim to fame and she will regale anyone she meets with the story.

Back in the 1950s, it was a trifle unusual for ‘ladies’ (not women) to be athletic. Babe Zacharias was unusual, but Esther Williams and her synchronized swimming had become popular. Mom joined other women in Mexico City and formed a swimming group that actually performed a routine for the President of Mexico. Most of the Mexican ladies found it scandalous for these American women to be parading around practically nude in front of men!

She insisted on all of us kids swimming as well. Mexico City, however, is at a very high elevation, which means it was always cold; not freezing, mind you, but plenty chilly. Most of the pools she insisted on us swimming in were not heated. I can still clearly remember her chasing us around the edge of the pool, furious, when we didn’t want to get in the cold water. We got in. And we learned to swim. 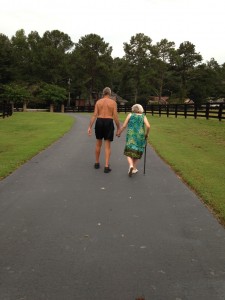 On the roads again

When we returned to the US, she gave up swimming while she raised us and finished her doctorate. But she hopped right back in the pool when she started running the roads with Al. She found out that there are YMCA’s and community pools all up and down the countryside open to anyone who wants to swim. She got in the habit of swimming daily, usually with Al dropping her off at the pool while he went off to play tennis.

Being a part of the swimming world, she also competed in the Senior Games (you can’t call them the Senior Olympics because they aren’t sanctioned by the Olympic committee – no one has to pay bribes to host the Senior Games). The advantage of being 70 or 80 or 90 is that the competition is not real keen in those age brackets. She won seven medals the year she turned 90, and beat everyone all the way down to the 70-75 year-old age bracket. 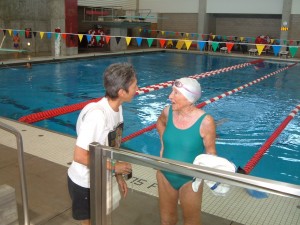 Now that she is stuck with me, we go to the Conroe Aquatic Center thirty miles down the road where there is a heated pool. All the lifeguards know her and admire her for being 96 and still so active. She thrived on the adulation and the exercise kept her going. Until a month ago.

Yesterday, when I offered to take her, she said, “Maybe tomorrow. I’m feeling lazy today.” It’s not that she’s lazy. Her energy is gone, and she can’t seem to get it back. What has happened to the body she counted on all these years? The will is there, but there is no gas in the tank, no zip in the Zippo, no buzz left in the bee, and she can’t understand it.

Every day, she’ll say, “I’m feeling better. I’m getting my energy back.” But she’s not. I feed her in hopes that the nutrients will return her energy to her—fruit smoothies with vitamins, vegetables, fruit, anything that will help. But she can’t seem to make it to the pool and that is disaster. Without the exercise, she can’t regain her energy, and without her energy she can’t exercise.