End of the World – The Terrors of Traffic

I know what is going to destroy the world and bring it to a screeching halt, forever.

It’s not going to be nuclear wars or holocausts. Those only affect a city or two, or a few million people. It won’t be Mother Nature’s hurricanes, tornadoes or tsunamis. Those only affect an occasional coastal area or a swath through some town in the middle of nowhere.  It won’t be guns and shootings in our communities. Those only take out a few dozen students and teachers, maybe even a whole family or two. Nope, we don’t have to fear any of those.

It’s Carmageddon, folks. It is the battle of us against the 253+ million other cars out there on the roads of these here United States. And the battle goes on across the globe. Think of traffic in Paris or London or Tokyo, or God forbid, Beijing, China. It affects us all, everywhere, every day. Like Armageddon, this is a battle of Biblical proportions that will mark the end of the world as we know it. And it’s our own automobile that is going to bring us to our knees.

I’ve had the inimitable pleasure of spending the last few days driving through traffic in Houston and Dallas. In the past, I’ve also enjoyed stop-and-go travel through Austin and San Antonio. Many years back I even got to drive in Los Angeles and, OMG, Mexico City. What joy. What excitement. What a thrill a minute. Just what everyone enjoys doing with their day—sitting in endless lines of traffic.

Last weekend, the Department of Transportation (TxDOT), in their infinite wisdom, decided to shut down the Hardy Toll Road. It is a road that parallels Interstate 45 as it passes from The Woodlands down into Houston. It usually drains off much of the I-45 traffic, making that highway almost passable. But not this weekend. 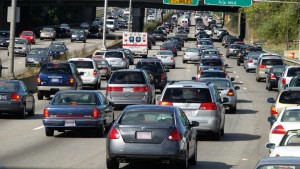 I am willing, happy, glad, even, to pay the toll to avoid using I-45. This time, however, there was no alternative. I-45 was solid, bumper-to-bumper traffic as far as the eye could see. In both directions. My only glimmer of hope was that I didn’t see any desiccated skeletons sitting in any of the cars around me. We were moving, but just barely.

I had left the peaceful sanctity of little Huntsville (and yes, we do have our own little traffic jams) to speak to the San Jacinto Chapter of the Sons of the Republic of Texas in downtown Houston. When I arrived, frazzled and exhausted, I voiced my complaints about the traffic. One of the gentlemen said there used to be 5 o’clock traffic, and ‘Rush Hour’ traffic, but if you stayed off the roads during those times, you could be fairly certain of an easy commute. And weekends were always a a pleasant drive on almost empty highways. Now, he said, there is just TRAFFIC, everywhere, all the time.

The men shared stories of the poor, benighted souls who have to commute across town to jobs and businesses every day. All of us have either known someone who has suffered those ‘tortures of the damned’ to get to work or have had to experience it ourselves. We don’t need to wonder what hell is like. We get to enjoy it every day.

And never mind the traffic accidents that tie up traffic for hours. Or the texters who cause the accidents. Or the tailgaters who drive inches from the guy in front or those irritating fools who ride our bumper. Or those morons that dodge in and out of traffic, cutting us off, and hurrying to get ahead, only to find us still beside them at the next traffic light. It’s not surprising that we all experience a bit of teeth-grinding, acid-inducing, mind-exploding ROAD RAGE.

And, since we practically live in our cars, there are the girls putting on make-up while driving. Hubby Flatbottom gets really irate at those. But I ask about the men shaving while driving, or those who go through the extensive ritual of lighting a pipe (like he does) while driving. Or those who even try to read the paper while driving. Thank goodness for Audible that provides a little distraction as we listen to good (or bad) literature.

And what is it with these cars that put the brakes on for you? Mine beeps loudly when I get too close to the car ahead, or veer across a lane line. At least my CRV doesn’t take away my sacred right to apply my own brakes. Long, long ago I used to wonder what it would be like to have a car that could steer itself, automatically obey speed limits and stay the proper distance from the cars ahead. Now I know. And I don’t like it.

Yup. It’s Carmageddon that’s going to bring on the end of the world. Soon, we are all going to be desiccated skeletons sitting in a long line of unmoving traffic.