Of Fairs and Festivals

The Square and Pop-ups–two inventions that have changed the world.

Okay, perhaps not quite as important as sliced bread or the internal combustion engine, but certainly those two inventions have revolutionized the lives of vendors and fair-goers. It is true, admittedly, that technology had to reach a certain plateau before these inventions could even be invented but unlike Tesla, they don’t depend on huge investments. 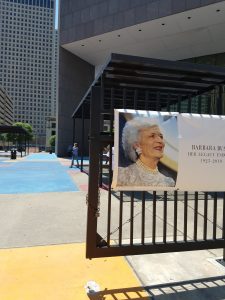 Last Wednesday, while researching at Houston’s downtown public library, I wandered outside to eat my apple and stretch my legs. My Fitbit said I had to. On my wrist, it had squeaked and said “Feed me” and “Only ten minutes to get 240 steps.” Obedient to its demands, I went out into the May sunshine.

Across the street from the severely modern, boxy black square of the Jesse Jones Public Library, spreads the lovely green grass and reflecting pool of Houston’s downtown main city park. Regrettably, the space immediately in front of the library which is Laura Bush’s Literacy Park, is nothing but a bunch of painted concrete squares. No fountains, no benches, no flowers, no nothing. What is the family thinking? Why put up a sign that says it is her “Literacy Legacy” then leave it barren and sad? Somebody should do something!

Across the street, the city park stretches away in front of the ten or twelve-stories

tall, Art Deco 1939 WPA City Hall. It could use a good cleaning, limestone doesn’t weather well, but it is still impressive. The gilded doors are guarded by the statues of the two Allen brothers who founded Houston back in the 1830s—in the swamplands beside Buffalo Bayou. And we know what that has gotten them. Inside, I could have gone up and sat in on a meeting of the City Council and listened to Mayor Sylvester Turner. But I saw another unusual site.

To my amazement, dozens of white and blue and green pop-up tents were going up all along the edges of the walkway around the reflecting pool. 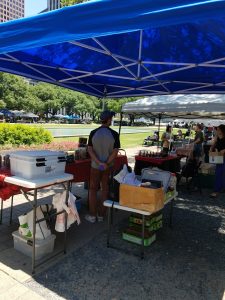 One young woman was single-handedly pulling apart the accordion folds of the ten-foot square tent, holding down the legs while clicking the lightweight nylon roof up and into place. Instant cover, immediate protection from sun and rain. Not the wind, however, which can turn those tents into flying kites in an instant. But they are the best possible protection for any outdoor activity. Heavy canvas tents, like those I used for the Sam Houston Folk Festival, (more about that below) have gone the way of the Dodo.

The pop-up tent has become ubiquitous. I’m sure you must have one in your garage. They are light enough for one person to carry, come in portable carrying bags, ingeniously convenient with buttons and sliding bars so one person can assemble them, and thanks to those inventive and hard-working Chinese, cheaper than dirt at your local Walmart. And if they fall apart the second time you use them, you can always “invest” in another.

It seems that Houston, thanks to Mayor Sylvester Turner, has instituted a Farmer’s Market every Wednesday in April, May and June from 11 to 1:30 on their downtown park. It was not fresh vegetables, however, that were for sale. It is food to feed the office workers from the hundred-story glass and chrome office buildings that towered around us and dominate downtown. And it was also herbs and spices, fancy hand-made soaps and scented oils, home-made breads and small cakes, and even amulets and magic charms for the believers. 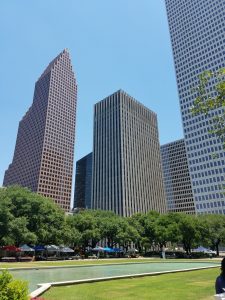 As I wandered down the length of the pool, there were vendors from as far away as Katy and Brenham, Kemah and Conroe. They drive in, park along the street, roll in their goods on carts, set up their tents, fire up their propane cookers and spread out their wares. All done in a matter of minutes. And they pack up just as quickly.

The food was world-wide. Chicken and rice Spanish Paella in giant propane powered pans. Pupusas and fried plantains from Colombia. Mexican street tacos (I still don’t understand the ridiculously small size of those tortillas) and barbecue beef, pork and chicken sliders, (again, another miniscule serving that I don’t understand). And Indian Chicken curry with Nan bread. The difficulty, it seemed to me, was deciding what to eat.

The Indian guy gave me a spoonful to taste. Smart salesmanship. Once the flavor had tantalized my taste buds, I had to come back to have some for lunch. The Styrofoam plastic box container (another one of those necessary inventions) promptly dripped yellow curry onto my white pants, but it was all good. How delightful to sit on a bench in the shade of an old oak eating delicious curry chicken, watching the office workers, young and old, from a dozen different nationalities, chatting and cheerful, wander by. They  picked their meals, then settled on tables and benches in the shade to enjoy their picnic. Alongside, the water of the reflecting pool sparkled, stirred by the gently blowing breezes. Overhead a bright blue, cloudless sky and a happy sun shining. Perfect.

But it is the Square that makes it all profitable. The what? The Square. Now-a-days, every vendor worth his salt has one attached to his cell phone. It is a scanner for credit cards. Type the amount of the sale into your phone, one swipe of the credit card through the tiny jaws of the small 1″ x 1″white square, have the purchaser sign the phone with a squiggle and the receipt is on its way to your e-mail. The money is transferred from your account to his or hers instantly.

One vendor said that if it wasn’t for the Square, he would lose as much as 80% of his sales. That is how popular those are. And for the skeptics The Square is supposedly safe and trustworthy.  It won’t steal your credit card number and won’t transfer thousands out of your account. If you don’t trust it, you can always carry cash. About 20% of the population do. The rest of us use our credit cards. 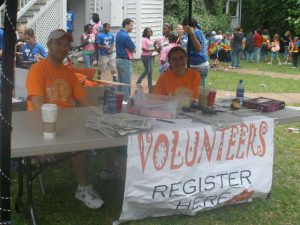 The following week, upon returning home, I had volunteered to work at our Sam Houston Folk Festival. Like the Houston fair, this festival, too, housed pop-up tents. Even though the items the vendors sell at the Folk Festival, in honor of the 1830s life of Sam Houston, are supposed to be period-correct, that doesn’t mean everyone has to use canvas tarps and tents. Years and years ago, our beloved Provost David Payne let me purchase six beautiful 12×12 heavy white canvas Civil War tents for our student Historical Society. Unlike the pop-ups, which may or may-not last the season, the canvas tents are still in use. And will be for many, many years to come.

A folk festival from years ago

Unlike the downtown “picnic” Farmer’s Market, our Sam Houston Folklife Festival is held on the Sam Houston Memorial Museum grounds. It is large enough to accommodate thousands of visitors. They get to enjoy more than just food. Here they get to watch musical renditions of jolly old songs from the historical past, speeches by Sam himself and declamations by our very own Margaret Lea Houston as played by the talented and beautiful Una Grace Nash. There are also eighteenth-century duels with cane and pistol (the students even get to participate, I cringed at those!), Scottish tomahawk throws, and nineteenth century children’s games on the lawn of the Woodlands Home.

Of course, there are quilters and weavers and spinners and cooking in Dutch Ovens. Thank you, Larry Molitor, for not forgetting, and putting those 45 Dutch Ovens to use. Those historic Dutch Ovens, again, courtesy of Provost Payne (it’s probably not surprising that he used to call me “The Pickpocket” every time I came in his office) are another “forever” useable historic item. 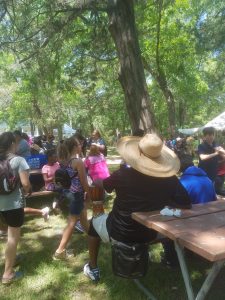 Kids at the Festival

Friday is dedicated to fourth and seventh grade students who are taking Texas History in elementary and junior high school. For this Festival, the Square was also in evidence. But these kids don’t need the Square. They don’t carry Credit Cards. They bring cash. In great handfuls. Wads of it. Piles of it. Staggering amounts of it. Our Historical Commission booth was selling pretty ladies’ folding fans with painted flowers on them for two dollars each. The kids were buying them like they were funnel cakes (no hotcakes here), hauling out pocketfuls of cash. Two dollars, for them, was nothing!

They could also buy confetti eggs to crack on each others’ heads, at 50 cents apiece. (Mind you it is possible, at Easter, to buy immense boxes of those laboriously dyed and stuffed and covered confetti eggs for 50 cents A DOZEN! Nice profit!) Also available, pretty circlets of flowers with ribbons for a girls’ hair for only $5. And bows and arrows for the boys at $5 and $10, wooden swords for only $5, and pop-guns at $10. And leather amulets, $5, with their initials or decorations hammered into the leather while they watched. The possibilities for purchase were as varied as the fertile minds of the vendors could produce. 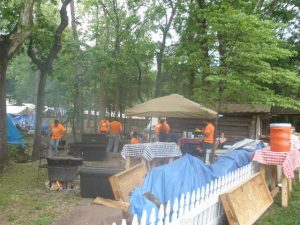 Of course, the difficulty with outdoor Fairs and Festivals came on Sunday. At 12:30 pm, thirty-minutes after opening, Mother Nature joined the party. A deluge opened up. A giant thunderstorm and lashing winds bombarded the few Festival goers and the frantic vendors. Suddenly, those little pop-ups were shuddering and shaking under the onslaught. The nylon tops were bellying and sagging with gallons of rain water. Even the canvas tents were swaying in the wind. Terrifying bolts of lightning and ear-splitting claps of thunder seemed to be crashing all around and our volunteer workers were cringing under the metal tarps, fearing the worst. The vendors scrambled to get their goods under their tents, the savvy ones threw plastic tarps over everything. Everyone was soon soaked to the skin, and it would take all of next week to dry out the tarps, the tables, the boxes and bags of sellable but sodden goods. They called the Festival and everyone packed up to go home.

Still, Friday and Saturday had been profitable. Everyone could laugh over their plight. And the pop-ups could be folded and stored, along with the Squares, for another day.

The cash went safely to the bank, thanks to the kids and their profligate parents.