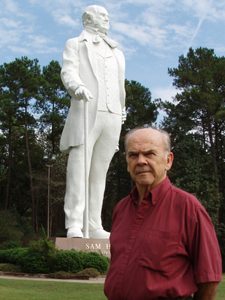 The massive statue of Sam Houston on Interstate 45 just south of Huntsville is known by everyone who drives by. His sculptor deserves to be better known.

The joy of living in a small town is that even the most famous artists-in-residence are as pleasant and approachable as your favorite uncle. David Adickes, the painter and sculptor is just such a man. Cheerful, friendly and funny, he is entertaining and a delight to talk to. He is so unassuming, however, that one loses track of the fact that he is a highly disciplined, world-renowned artist who has been feted by presidents and admired by celebrities. 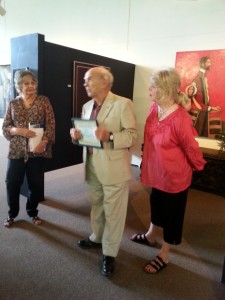 I had the pleasure of meeting the famous sculptor and painter at a reception given by the Walker County Historical Commission in his honor. Adickes received the county’s thanks and a certificate for his preservation of the old Huntsville High School building. The City of Huntsville had planned to tear it down but the cost of nearly $95,000 was too high. David Adickes came to the rescue. He bought the building and turned it into the David Adickes Foundation. He has restored it and made it into an impressive studio that houses over 300 of his immense collection of paintings. He hopes to open it as an art museum in the not-too-distant future.

Adickes had good reason to buy the building. Born and raised in Huntsville, he attended Huntsville High school during the 1940s. He still remembers the friends he made here and the fun times he had at the school. He even claims to have learned to jitterbug in the auditorium. 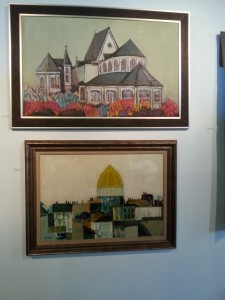 From Huntsville, he moved to College Station where he attended Texas A&M for a year. Influenced by his father and brothers, he planned on going into engineering. But with World War II still in full swing, he joined the Army in 1944. He was assigned to work on transport planes that carried goods to Paris. Once there, he fell in love with the city. He realized that his initial love of art was not a pipe dream. People in Paris actually made a living as artists.

By the end of the war, he moved to Paris where he joined the Atelier of F. Leger and trained as an oil painter. He also spent a year in Japan and traveled the world, absorbing the ideas and the art of cultures around the globe. After some twenty years of painting, he decided he needed a new challenge. His decision to turn to sculpture took a leap when he shifted from mere life-size bronze sculptures to giant works of art. 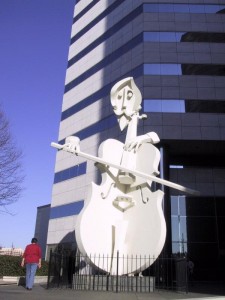 Cellist in front of Lyric Center

Adicke’s first monumental piece was a planned 16-foot statue of Sidney Lanier to be installed near Lanier High School. When that project was not picked up by the city of Houston,  he continued to consider giant concrete pieces. In 1982, he made contact with Joe Russo to create an eye-catching centerpiece outside the entrance to the new Lyric Center in Houston.  Combining whimsical fantasy with reality, he created a concrete and steel statue of a cellist in three dimensions with light and sound. 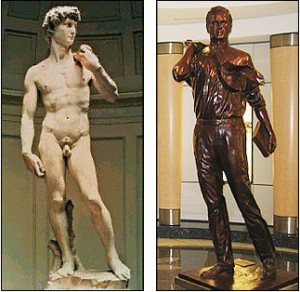 The David compared to the statue of George Bush Sr.

He went on to design and build a cornet, called The Stone Trumpet, for the 1984 Louisiana World Exposition. The cornet was later moved to Galveston where it remains today. He also completed a larger-than-life size bronze statue of President George Bush. The Bushes had bought one of his paintings earlier, and were willing to have the president pose for pictures. While planning the project, Adickes even got to attend the Kennedy Center with the Bushes, ride in the presidential limo and sleep in the Lincoln Bedroom in the White House. No, the David was not the inspiration for the statue of President Bush although there is a simlarity.

Returning to Huntsville, Adickes decided to build a 67 foot statue of Sam Houston. He offered the statue to the city for free if the city would build the base. City Manager Gene Pipes fought for the statue. In spite of intense opposition, he and his supporters, including University president Martin Anisman, eventually got the city to accept the massive gift. After incredible difficulty and overcoming many problems, it was completed and installed in 1994. An excellent book by Linda Wiley called Making it Happen: Exploring the Creative Process details the

incredible challenges faced by Adickes and his supporters and defenders. 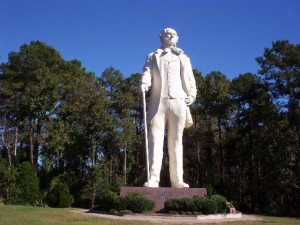 Sam in the distance

Located at the bend in I-45 just south of Huntsville, the statue of Sam Houston is visible for miles in either direction. Even if many people were opposed to the idea or thought it was a silly waste of taxpayer money (the city only paid for the base), almost everyone has come to appreciate the statue. Annually, the “Toast to Texas” on March 2 is carried out at the statue Welcome Center and tourists stop there as they pass.

For those of us who live in Huntsville, Old Sam is a comforting sight. When he comes into view in the distance, 12 miles from Huntsville, we know that we are just minutes from home.