Over the last three months, our Granaderos y Damas have been planning our Symposium in honor of Bernardo de Gálvez. For our Keynote speaker, we had hoped to secure the services of a scholar named Dr. Thomas E. Chávez. He is the author of a book titled Spain and the Independence of the United States, a book which covers a massive amount of material and is the seminal work on Bernardo de Gálvez. We were in awe of his scholarship and his knowledge.

For months we had tried to get in touch with this elusive scholar to ask him to come speak. We were fairly certain that he would be far too busy and far too important to have anything to do with our little conference. We envisioned a high-powered executive-style CEO type who only hob-nobbed with the very best and brightest. Certainly not us!

When he hadn’t responded after several emails, our hopes of having such a distinguished and important scholar attend our conference had been dashed. We felt that the whole symposium revolved around him. Without him, we were nothing. We felt as low as a snake’s belly. Why even go on? Who would come? No one, we were certain. 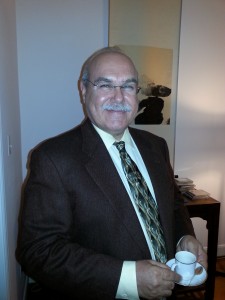 Then, out of the blue, one of our members, a very highly placed Spanish diplomat who shall remain nameless (Heaven forbid I should get into trouble again for naming names), received an email from the esteemed doctor. He had been in Mexico and had not received our emails. He said he had a conflict and was already giving a presentation on the same day as our symposium. After another flurry of emails in which we offered the bribe of an honorarium, he agreed to change his schedule and come join us.

Wow!  We were elated! In awe! Ecstatic! We had secured the GREAT Dr. Thomas E. Chávez as our Keynote speaker. He had postponed another appearance to come to Houston for us! We felt as though we had just received the honor of hosting a Nobel Prize winner, or some famous performer, or even the King of Spain. Surely, this august personage who had agreed to grace us with his presence would sneer at our little conference. Having to put up with us rubes would be far beneath his dignity. But we didn’t care. He had agreed to come.

The Honorable Ambassador (retired) and me

At last, on the day of his arrival, we were on pins and needles. We sent our most prestigious member, our retired Honorable Ambassador (again nameless in case I might cause an international incident) and yours truly (as navigator and representative of academia) to pick up the famous Dr. Chávez down at Houston Hobby Airport.

We were following our GPS (again, that damnable lying temptress) and got lost in a not very good neighborhood near downtown Houston. After several wrong turns and the irritation of having that disembodied voice telling us to U turn, and go back down this street, and back down that street, we finally gave up. In desperation, we asked a passing van driver how to get onto I-45. The driver grinned out the window and said, “Follow us. You should have been following us all along.” Yes, we probably would have been if we hadn’t been counting on Siri or Cortana or whatever her stupid damn name is.

We finally got back on I-45, terrified we would be late to pick up our famous arrival. With not a minute to spare, we pulled into the Passenger Pick up lane. The Honorable Ambassador screeched to a stop, punched on his emergency flashers and I bailed out to go find Dr. Chávez. Mortified, I realized I didn’t have a neat little sign like all the elegantly attired black-coated chauffeur drivers waiting for their arrivals. Had we missed him? Would he be insulted?

In the picture on his web page (don’t you just love Social Media?) he looked terrifying. Arms crossed, staring stone-faced from the screen, looking at least seven-feet tall and overpoweringly frightening. I scanned the passengers exiting the terminal. Suddenly, there he was. Pulling his suitcase. Perfectly pleasant looking. Perfectly normal. And not seven-feet tall.

Tom didn’t want to be called Doctor or Professor or Esteemed anything, just Tom. During the next fourteen hours that we hauled him thither and yon, he turned out to be the most unassuming, cheerful, friendly, funny and entertaining of guests. 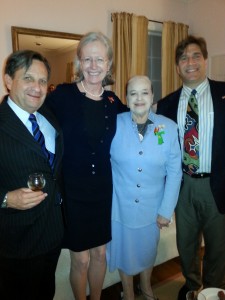 He put himself at our beck and call. Whatever we wanted him to do, he was more than willing to do. Hours in the car, coffee at the Hyatt, lunch with our President General, cocktail party with an opera company, back to the hotel, pick up the delightful Dorothy Caram, and finally to dinner at the Spanish Consul General’s home. Still cheerful. Still pleasant and amenable. And this after hauling out of bed at 4 am to make his flight.

We learned he is a 13th generation New Mexican who speaks passable Spanish. He is currently writing a novel about an equally long-lived Romero family while working on a book on Benjamin Franklin’s relations with the U.S. Turns out he has never been a professor but has worked as a director of several prestigious museums. He’s also spent a great deal of time in Spain, Mexico and now Cuba, researching for his books. He met his Argentinian wife at the Archive of the indies in Seville while researching and they had two daughters.

He also had a Fulbright to Spain to work on his magnum opus on Spain and the American Revolution. When he arrived at the Archives in Sevilla, he proudly told the director what he was studying. The Director eyed him coldly and asked, “Which American Revolution?” For the Spanish, all of the Americas, from Newfoundland to Tierra del Fuego, had revolutions. 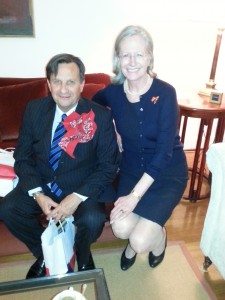 Tom’s cheerful personality and his outgoing nature won him friends throughout Spain and Mexico (and now in Houston, TX). As director of various New Mexico Museums, he has indeed hobnobbed with the swells. He knows ambassadors, diplomats, scholars and presidents. As I should have expected, when we arrived at the “Residence” of the Spanish Consul, of course he knew the Consul, personally.

The dinner, by the way, was everything that Downton Abbey had led me to expect. A table set for twelve with gold-rimmed plates, each bearing the Spanish emblem in its center. Crisp white linen table cloth and napkins, bouquets of spring flowers amid lit candles. Wine, water and champagne glasses with the Spanish coat of arms engraved on each one.

Cold tomato gazpacho placed in front of us, with the condiments provided on a silver platter. White wine and then champagne. And the waiters serving fresh Red snapper, grilled to perfection, from even larger platters. And new potatoes and steamed asparagus with a lemon-butter sauce. I thanked my lucky stars for Downton Abbey. I knew enough to politely serve myself with the silver serving pieces while the waiter held the platter out on my left. We finished the meal with bowls of fresh rasberries in cream. 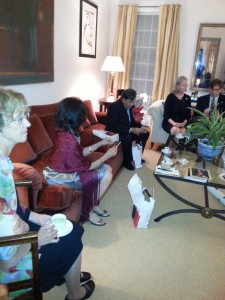 And when we “went through” back in the beautifully appointed living room, we were served coffee in small demitasse cups and snifters of brandy with a variety of Swiss chocolates. Blessings on our beloved President General John Espinosa, he and VP Mary Anthony did us proud. Tom and the speakers and members of the committee each received a lovely gift bag. After toasts and congratulations, I brought the exhausted Dr. Tom back to the hotel.

It’s now nearly five a.m. The day of the conference is dawning. How will it go? At least our Keynote speaker is a delight and we’ve made a wonderful new friend.

He has far exceeded any expectations we had of him.