On neighbors and beef jerky

Out in the woods

We live out in the woods, seven miles north of the small town of Huntsville, population 30,000+ depending on whether you count the college students and the criminals. This is, after all, the prison capital of Texas where we have more prison units than college dorms.

Up until a year ago, we had no neighbors and Hubby Flatbottom was perfectly happy with that. Of an evening, our dogs would go out the dog-door to bark in the woods, but we were blissfully unaware of any wild animals, other than an occasional deer. We did get a possum in the back porch once. Boy, are they ugly looking creatures up close—long snout, sharp teeth, tiny black eyes, mean disposition! Eased it out of the back door by using a large piece of cardboard. 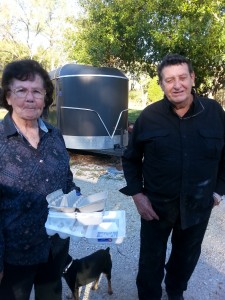 I had been oblivious to our wild animal kingdom until our neighbors, the Taylors, moved in just down the creek from us. I would say next door, but next door is about a quarter of a mile away through the woods, and across the creek. As I’ve explained before, Jewel and Susan Taylor are from Arkansas. He is a big, gregarious, pot-bellied, Southern-style ex-Deputy Sheriff from Harris and Montgomery Counties. She is a tiny mouse of a woman, short, frizzy hair, cheerful and friendly.

As I learned from the Taylors who have installed cameras all over their property, what we do have out here in the piney woods are wild hogs and coyotes and very big cats of some sort or another – not panthers or leopards but large, spotted close cousins. We also have deer out on the deer lease next door that the Taylors lease to their gun-toting hunting friends.

Yesterday, Hubby Flatbottom and I had settled in to watch our Tuesday evening programs when we heard a horn beep outside. Grumbling, he looked outside and came back to report it was “my friends” the Taylors. I put aside my half-finished supper bowl and went out to see what they wanted. I didn’t invite them in but stood beside their little red car to chat.

Let me stop here and compare customs. Hubby Flatbottom is a city boy. Anyone who has lived in a big city knows that you don’t usually know your neighbors. People live in apartments with air conditioning and television which precludes the need to do more than nod on the way to or from work or the grocery store. If you have a dog, it is walked on a leash late at night or early in the morning, again with a nod to other dog-walking neighbors. No borrowing a cup of sugar or chatting on the stoop or over the back fence.

Suburbia is a little different. Having children requires knowing neighbors, especially if the kids are in clubs, sports activities or share the bus stop. While we lived in Austin, I became very good friends with several of our neighbors. Afternoons, I took the kids and the dogs down to the park to play, or dressed them up for Halloween or took them to movies. Very friendly and fun.

Out here in the country, friendly interchange is expected. There is no one else to talk to or depend on. Neighbors usually don’t mind having someone drop in to chat. There is a problem here. Jewel Taylor loves to talk. He will talk non-stop for an hour or more. And Hubby Flatbottom does not. He’s a city boy and dislikes being sociable. He says he had to be sociable all his life and isn’t going to do it now. He prefers being a hermit. So I go outside to commune with the neighbors. It seems Taylor had shot, not one, but three hogs. He had brought us some hog jerky in a little zip-lock bag. He also offered us pork sausage. His little wife said there was nothing better as a hamburger patty on a bun with mustard or on a biscuit in the mornings. Since Hubby only eats Jimmy Dean frozen breakfasts bought from Walmart, and I have oatmeal, there was no use in taking the sausage. That does seem a shame, doesn’t it?

During the next hour, I learned that the Taylors butcher the hogs themselves. I winced at the thought of carcasses hanging from the trees behind their house. I asked what he did with the blood and guts. Seems he takes the offal in tubs way out to the far end of the property, a couple of miles back in the woods, and leaves it for the coyotes! Excellent. And I’m sure the coyotes don’t follow him back to our little haven in the woods. 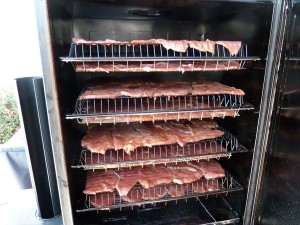 I asked if he smoked the jerky over an open fire. Nope. They are civilized. They have a big electric meat grinder, then they use an electric, plug-in machine that dries out the meat to perfection. A little hesitant, I tried it and was amazed. Unlike the teeth-busting, hard, salty strips you buy at the gas station convenience store, it was soft and really quite tasty. He offered more, but one zip-lock baggy was quite enough.

Now, what could I possibly give them in exchange? Maybe some of my strawberry-jalapeño jam that we made for the church bazaar? It’s the neighborly thing to do, after all.