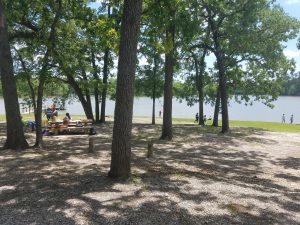 It seems one CAN get lost in the Limberlost.

Several months back I went exploring on the 300-acre wooded property belonging to our university. It had at one time been a Works Progress Administration fish farm and still had large concrete ponds and canals to channel the water into and out of Harmon Creek. The road to it is still called Fish Hatchery Road. It also contains our Forensic Studies Body Farm for the benefit of the students. https://www.carolinacastillocrimm.com/guard-of-the-limberlost/

Back then, it had been such a lovely walk. Cool breezes among the tall pines, bright blue sky, and soft pine-needles underfoot. I met the biologist who runs the place and several of the student helpers. It was an experience that I remembered with tremendous pleasure.

Yesterday, I let the day get ahead of me (from enjoying writing the truck blog) so that it was 9 am before I got around to walking the dogs. It is almost June and the days have been getting downright hot. Someone commented that they didn’t think August would get here this early. The shade in the neighborhood across the street where the dogs and I usually do our 3 to 5 miles was getting pretty puny and the black asphalt was getting miserable. Even the dogs were staying on the grass and under the shade of the trees.

Remembering that beautiful, idyllic setting out at the Nature Preserve, and the cool shade of the trees, I decided to drive out there to do our walking. As usual, I parked outside the gate and went in with the three dogs. Lovely shade, pine needles to cushion the ground, mowed grass paths and no one around, probably because it was Memorial Day. This time, instead of turning right and going around the property, I turned left. This time I evidently wasn’t paying attention to where I was going. It took me three hours to realize I was completely and utterly lost. 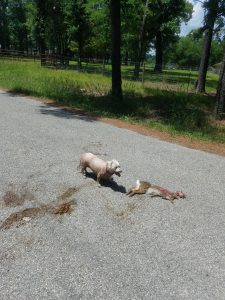 I also keep one of those “quote-a-day” calendars that always has upbeat sayings. There are dozens of sayings extoling positive thinking. They proclaim things like “No day but today” or “Don’t assume a door is closed. Push on it,” or “The good news is that you don’t know how great you can be!” The one I like best, however, is probably “Lord, make me so uncomfortable that I will do the very thing I fear.” Fear of failing is a great motivator. Fear of getting lost had not entered my head. After all, I hadn’t gotten lost before.

Part of why I got lost is probably the fact that Iwas listening to David McCullough’s book, The Great Bridge, on the building of the Brooklyn Bridge. Now that is a story with positive thinking. It is the story of John A. Roebling and his son, Washington Roebling, a Civil War colonel. In the book, McCullough describes all the many people who built or tried to build suspension bridges. Their determination was impressive. Undaunted by refusals or naysayers, they talked others into supporting their efforts. Even if they failed, they kept going, working to make their dreams happen.

Have you ever noticed that athletes are particularly good at positive thinking? They are successful later in life because of it. It’s those self-starting, self-disciplined positive attitude people that I envy. They have learned to discipline themselves and they stay positive. The Olympics are always awe-inspiring, but even on the local level, I remember when I was the sponsor for the swim team at Winter Park High School. Those kids were in the pool at 6 am, swimming laps. And heaven knows, the high school students who are part of the football or basketball or baseball teams are always working out, lifting weights or practicing in the heat of the day. Even losing a race or a game doesn’t stop them. Next time they will win. Or the next time, or the next time after that. They take that positive attitude and that self-discipline into their lifetime careers—and win there too.

And then there are the rest of us. I would argue that we have positive attitudes, too. We may not be great, award winning athletes, but in our own small way, we win at life, most of the time. When we marry, we are positive it is going to work out. When we find a job, we are sure it is going to be the greatest job ever. When we buy a house, we are enthused about its possibilities. And when we retire, we are certain we’ll survive somehow, even if it is only handing out samples at Walmart. We have to stay positive or we wouldn’t survive.

I usually have a positive attitude. It has its dips into depression on occasion when I haven’t carried out work I knew I was supposed to do. All too often, my far-too-fertile brain comes up with stupendous ideas that never actually come to pass. Not enough self-discipline, I’m afraid! It terrifies me to be one of those “all talk and no action” kind of people. There’s that fear factor as motivator! And now, out there in the woods, my positive attitude had hit bottom. 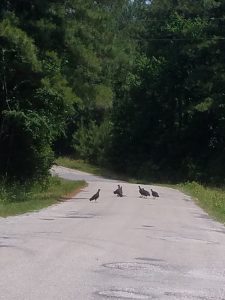 So how did I get into this pickle? Maybe it was my positive attitude. Surely, I couldn’t possibly get lost.

I had been walking for three hours by the time I realized I was in trouble. The trees and the forest paths all looked the same. The sun was now directly overhead so I couldn’t tell which way was east or west. I had crossed Harmon Creek three times, the dogs lapping at the water and rolling in it. I wished I could do the same. Finally, I saw the white walls of a house through the trees. I crossed a downed barbed wire fence and went toward the house, thinking it was the biologist’s home.

It wasn’t. Large dogs in their yard kept me from going up and knocking. And in the next house and the next. The trees had disappeared. I was in some kind of a ranch-style subdivision. But the road had no sign. I kept on going, positive I would find someplace I recognized. The road got hotter, the limestone glaring white hot in the noon-day sun. Less shade. No shade. I stopped to let the dogs go through a barbed wire fence down to a stock pond. Then we kept going. Ahead, vultures had settled onto the squashed rabbit.  Me next. 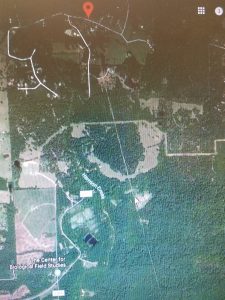 Miles and miles out of the way!

Positive thinking has its limits. After another half hour, I finally found a road sign. Thank goodness, my cell phone still had a little charge left. I called for help. My friend Pauline, not knowing where I was either, got her son to find Highland Drive on a Google map. It seems I had gone in the wrong direction and was many miles north of Fish Hatchery Road, way beyond the limits of the Nature Preserve (which is the small dark blob at the bottom of the map).

I waited in the shade of one small tree and she came to my rescue. And suggested that perhaps she should just leave me at the Body Farm.

Now that is Positive thinking.