On The Institute of Hispanic Cultures 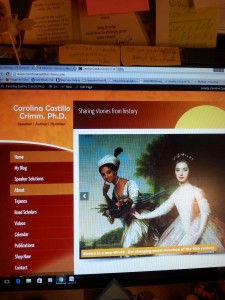 Nope, I’ve missed the blogging too much. I’m going back to daily blogs, so look for the ramblings of my feeble mind again with your daily coffee.

Blogging is good practice for writing, it’s good discipline, and it’s a good means of getting focused. And it’s delightful to know I have a kind and gentle audience. You certainly don’t have to read them all, and I know you will forgive me if I miss a few, too. If you have any suggestions, let me know. (Mario, yours is upcoming). Hugs, dear ones!

I had a chance to enjoy the meeting of the Institute of Hispanic Cultures last night in Houston. This is an organization that seeks to bring together all those of Hispanic culture or interest, regardless of what Hispanic country they come from. They provide a venue for sharing the culture of all the Hispanic countries, from Spain to the whole New World: art, scuplture, music, dance, etc. They’ve also faced a lot of racism, but more on that mañana.

There were two young men from Spain sharing their ‘in-progress’ documentary called ‘Back to Barataria.’ I had no earthly idea what they were dealing with since the only Barataria I know of is the one in Louisiana. It seems they were looking for places – street names or place names – throughout the United States that referred to Miguel Cervantes and his 1,000 page mystical masterpiece, “Don Quijote.”

They received a grant from the Spanish government to do this. I am still unclear on the reason for choosing the United States and not Latin American countries. They have only found and photographed half-a-dozen streets in Florida, Louisiana, Texas, New Mexico and Arizona. Perhaps because these states have Hispanic roots? But they have talked to Spanish-speakers in the area and discussed the whys and wherefores of the street names. Perhaps it has helped the Hispanics in the U.S. to appreciate their Hispanic heritage a bit more.

The British, from what the members of the audience said, are already gearing up for a huge, year-long celebration of Shakespeare’s life and works. Every cultural office, agency and institute of higher (and lower) learning are planning celebrations, programs and presentations. The Spanish, in what my fellow audience members said was typical Spanish fashion, are just now getting around to ‘throwing something together.’ Olga denied this. She said there are Cervantes groups in every town in Spain. They were supposed to handle the celebrations. Only,  they haven’t.

I know whereof they speak. I’ve been helping the Granaderos y Damas de Gálvez put together a symposium at Rice University in honor of Bernardo de Gálvez. After having put on dozens of programs, I know we should have started organizing a year ago. In proper Spanish fashion, we are just barely getting around to funding our $10,000 program.

At least we have the venue (McMurtry Hall at Rice University), the date (April 2nd) and some of the presenters.  Dr. Moramay Lopez from Rice will talk about the economics of the 18th century. The retired Spanish ambassador Miguel Angel Fernandez Mazarambroz will discuss the international situation. Dr. Gonzalo Quintero from the Spanish embassy in D. C. will talk about his 1,000 page dissertation on Bernardo de Gálvez. And maybe we’ll have Dr. Thomas Chavez who has written the best book on Spain in the American Revolution. And me. 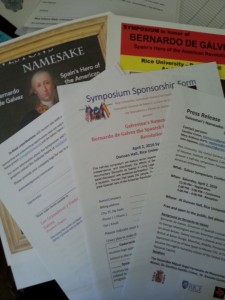 Of course there have been endless meetings. All without a dime collected. What should we call it? What should the Press Release say? Do we word it this way, or that way? How much information do we include about Bernardo de Gálvez? Do we have a 4-page, 6-page, or single page program? (I had to escape from that meeting).

What should the flyer look like? Is this logo bigger than that logo? Bigger lettering? Smaller lettering? White or colored lettering? This was flyer-by-committee, like the joke about who made the giraffe. About the only thing we could all agree on was that we should have tapas and Spanish wine at the reception. (The one on the left was finally chosen).