At 7:00 am, it’s cool here on the porch of the Veranda Historic Inn in equally historic Fort Davis where I have parked myself to type this morning’s blog. It’s something in the neighborhood of 60 degrees. Pleasantly chilly after leaving muggy, hit-you-in-the-face 100 degree temperatures in Houston. 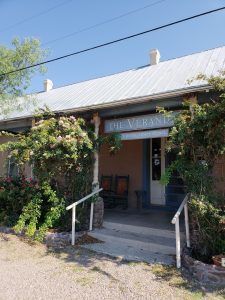 We expected it to be boiling hot since this is, after all, Far West Texas. The difference, however, is that we are over 5,000 feet. At a decrease of 5.58 degrees Fahrenheit for every 1000 feet of elevation, the temperature starts the day in the low 60s and only rises into the low 90s by late afternoon. Go out in the afternoon sun, however, and you will feel the simmering heat.

The Veranda Inn claims to be one of the oldest and most historic hotel in Texas. I thought San Antonio had that distinction, but everyone likes to claim the mostest of something. The Inn was built as the Lempert Hotel in 1883, just as nearby Fort Davis reached its peak. With 700 men stationed there, the town needed the 35 room hotel to house civilians who served the fort and for guest passing through on the Overland Stagecoach Route. Like the Fort, the hotel, too, was constructed of two-foot thick adobe walls with high, 12-foot ceilings. There is little in the way of wood for construction around here.

During its 130 years of life, the hotel was renamed the Stewart Hotel, before becoming the Clark Apartments. In recent years it has been remodeled and turned into a commodious and comfortable 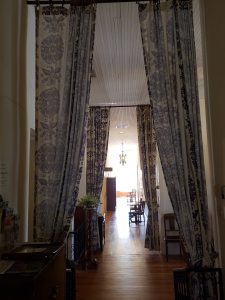 Veranda Bed and Breakfast, one of several B&Bs in the touristed area. I think maybe a B&B is a good excuse for somebody to have a lot of fun collecting Victorian era furniture and décor to fill the long halls and the spacious rooms.

The combination of adobe walls and 12 foot ceilings keeps the building at a steady 72 degree temperature even on the hottest days. Just in case, the rooms have air conditioning window units. Some of our friends, however, wanted it much cooler and took off for the Hotel Limpia, named for the intermittent creek that wanders through the area. Like the Trombé walls used in New Mexico, the adobe holds the heat of the day and releases into the rooms at night. Winters, I’ve heard, can be pretty miserable.

The porch is invitingly set with wicker rockers and cushioned chairs in cozy groupings. The cool breezes make it a pleasant place to eat breakfast (with a light jacket on) or have an afternoon cup of tea, read quietly or share pleasant thoughts with friends. 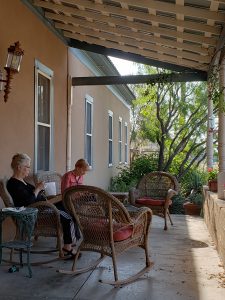 Beside me on the porch, Knockout roses form a leafy barrier between me and the quiet street. We can hear Eurasian Collared doves gurgling (Trisha looked them up), pigeons cooing, the twitter of barn swallows, and the chirping of mockingbirds in the few mesquite and Douglas firs around us.

The car traffic is almost nonexistent. In only two days, we recognize the comings and goings of the few cars which travel up and down Court Street. We can hear cars coming in the distance and we listen as though to some foreign monster.

The deep bong of the courthouse clock chimes seven. Through the pines, I can see the cupola and white columns of the Greek Revival courthouse across the street and down a block. We held the wedding there yesterday for our friends Paula and Bruce—our reason for coming out to West Texas. But Fort Davis is a fascinating, if tiny, town to visit. (More about the Fort itself tomorrow). 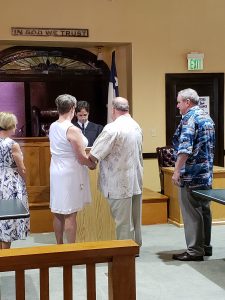 The first white colonizers occurred at an Indian settlement known as Painted Comanche Camp, named for the native pictographs decorating the rocks. Bn 1850, two years after the discovery of gold in California, the government realized it was imperative to establish a cross-country mail route. That created a need for towns across this rather barren part of the Chihuahua desert.

This particular corner of Texas is a flat, grassy valley surrounded by thousand-foot steep, rocky mountains. and barren deserts. It sits astride the Native American hunting routes into Mexico. It was, by government standards, a logical place for a fort to protect the area, “pacify” the natives, and create a town. Fort Davis was established as part of the string of forts across West Texas. The hodge-podge civilian town of Chihuahua grew up nearby with bars and other “necessary” red light establishments.

Henry Skillman had contracted to bring the mail from Fort Concho through what would become Fort Davis. He was accompanied on the first run by the famous Texan, “Big Foot” Wallace and Diedrick Dutchover, a Belgian immigrant, and a small contingent of soldiers.  When a stage coach stop was established in the valley, E. P. Webster, a native of Illinois, took over as the manager. One can only wonder in amazement at what possessed him to settle out here. Dutchover rode as a stage coach guard for two years before settling in the rag tag town of Chihuahua. 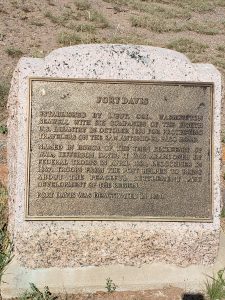 By 1854, the Fort soldiers had failed in their attempts to pacify the many Apache and Kiowa tribes who ranged throughout the area. In six years, they did little more than construct a few makeshift buildings and fight skirmishes with the native tribes. With the coming of the Civil War, the fort was abandoned, and most of the civilians from the town of Chihuahua scampered off to safety in El Paso or their homes in the East.

Only Dutchover, now the owner of a sheep ranch, remained along with a Mexican woman and 2 children. We tend to forget that the Natives knew full well that the whites were conveniently fighting each other in the East. Nicolás, the Apache chief, promptly attacked the fort to strip it of any useable goods. Dutchover and the civilians hid on the roof of his ranch and finally escaped at night to eventually reach Presidio on the Rio Grande, just as a contingent of Texan soldiers arrived to retake the fort.

The battle of Glorieta Pass in nearby New Mexico, in March of 1862, marked the only Civil War battle in the area. Although the Confederates pushed the Union troops back through the pass, they eventually lost the battle and retreated back into Texas. The abandoned fort played no part in the overall conduct of the war.

The Buffalo Soldiers of the 9th and 10th Cavalry units were stationed at Fort Davis. The soldiers eventually defeated the native tribes, either killing them off or forcing them onto reservations in Oklahoma.

By the 1880s, among the buildings in the little town of hanger-ons was the adobe Lempert hotel. According to a later article by Barry Scobee, some the earliest visitors were Quanah Parker and two of his lieutenants, Rising Sun and Nan Notee. They arrived in December of 1883, shortly after the completion of the hotel. Since they were not allowed off the Oklahoma Indian Reservation, they were accompanied by an Indian Agent, one George Fox of Wichita Falls. The Chief had requested permission to come in search of the Peyote buttons which his tribe used for sacred rituals.

The article explained that Miss Fink (later Mrs. James Stewart, wife of the County Clerk of the County who served for some 30 years and later bought and renamed the hotel), opened the door to a knock to find “three heap big Injuns” standing at the door. The agent explained the mission and the government paid for the four men to stay for two weeks.

According to Comanche lore, the Peyote was only found on nearby Mitre Peak. In actuality, the hallucinogenic mushroom is found along a narrow band of land ranging from Texas and New Mexico, south into Mexico and down to the coast. The use of the Peyote is said to have come from the Aztecs back in the 16th century and was adopted by the natives of Texas during the late 1800s.

The little town, and its surrounding county of Jeff Davis, languished when it was bypassed by the railroad and when the fort was closed. Today the town and county only boasts a population of about 2,200. Like its neighboring towns of Alpine, Marfa and Van Horn, it encourages tourism with summer programs of art and music. Fort Davis is not as elaborate as Alpine, which boasts Sul Ross State University, and Marfa which has set itself up as an art community. 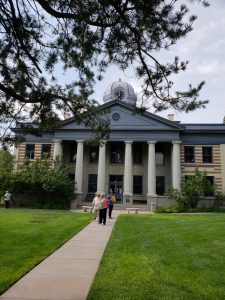 The teensy town of Fort Davis is fortunate to base much of its (all right, I admit) limited tourist draw on three things: the McDonald’s Observatory on 6,800 foot Mt. Locke nearby (where we went last night for a Star Party, more about that in a later blog), the beautifully restored Fort Davis National Historic Site (I promise more about that tomorrow), and the Chihuahua Desert nature center where we are supposed to go today before it gets too hot.

I hear the town clock striking eight. It’s time to go walkabout and see who is stirring as the sun tips the tree tops in gold, while the full moon drops down behind me.

Oh, my goodness! There goes a car! Such peace and quiet encourages a leisurely, laid back morning. You should try it sometime. It’s amazing!