The Importance of Water

One rarely appreciates something until it is gone. 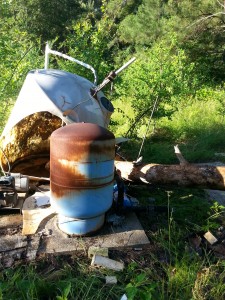 Last week a pine tree fell on our water storage tank and squashed it to bits. Since we live in the country, we survive on water from a well pump, a 500 gallon storage tank and a 100 gallon pressure tank. If a pump goes out, the well goes dry, the electricity fails, or a pine tree does a number on our tanks, we are reduced to dipping muddy water out of our creek, assuming it has water in it, which it doesn’t for most of the year. 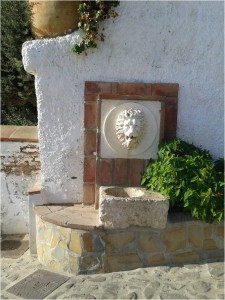 It is at times like these that I think a whole lot about the importance of water to our civilization. Little Bernardo de Gálvez in his southern Spanish town of Macharaviaya had to haul water up a long, long steep hill for his mother until his uncle finally had water pipes installed. Our pioneer ancestors had to set up their homes as close to water as they could, then haul the precious liquid in buckets for cooking, washing, and minimal bathing. I wonder how people on the dry Central plains of the United States survived. Surely they dug wells, and when those went dry during the Dust Bowl, they went to California. 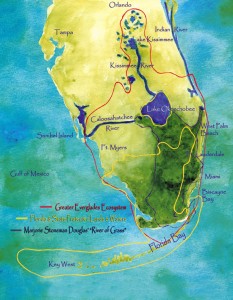 While I was in Florida, I taught Florida History to students at Winter Park High school. I had learned about the importance of water from the esteemed Dr. Charlton Thebeau who taught us the dangers of draining the Everglades. In order to open lands south of Lake Okeechobee for sugar cane and vegetable production, the U.S. Corps of Engineers (in their often faulty wisdom) built levees and channeled the water of the lake. They prevented the water from spilling south into the vast marshes of the Everglades.

Within twenty or thirty years, the Everglades were dry and burning. So much for farming in the region. The exploding population of South Florida also learned that their water wells near the coast were sucking up salt water instead of fresh water. The Aquifer, the underground limestone sponge that had carried fresh water to the coast for generations, deprived of its recharge of rain water could no longer keep the oceans at bay. The waters of the Aquifer were receding, ocean water flooding in, and the aquifer suffered from Salt Water Intrusion, ruining Miami’s water source.

The same can be said of many seaside communities on both the East and West coasts. They now rob water from each other through massive pipes and giant pumps (See Los Angeles and San Francisco Water wars  http://archinect.com/news/article/135055228/how-is-water-used-in-california). The same holds true for interior towns like Austin and San Antonio which also depend on aquifers and storage lakes. The limestone aquifers are being sucked dry from overuse and when the lakes dry up, water rationing is a way of life. People in high-rise condos can’t go dip water out of the creek.

The hurricanes that have struck Texas, Louisiana and the Gulf Coast in the last few years have made us aware of the dangers of counting on a dependable source of water. Think of the hundreds if not thousands of people using toilets in those vast beach-front high rise apartments, hotels and condos. Condos don’t have outhouses.

I heard stories of people in New Orleans after the hurricane holing up in hotels, clinging to life while their toilets overflowed. Without water to flush the daily waste away, those places became completely uninhabitable in no time. 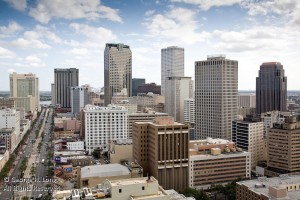 Have you ever smelled a toilet that has not been flushed in a while? “If it’s yellow, let it mellow, if it’s brown, flush it down” is the adage by which many of those in water-rationing areas have had to live. But what if there is no water at all for days or weeks at a time? People in “Hurricane alley” have had to live with that reality every year.

There are cities and towns around the world that are subsisting on little water. But no one can survive without any water. It is simply impossible to continue to live in these high-rises when electricity fails and water cannot be pumped to higher floors.

We tend to dismiss the problems of the people in Africa where the dry lands of the Southern Sahara are creeping southward. Or people in huge urban areas like Mexico City where water is running out and sewage is taking over. Our beach-front condo dwellers may have to think about those water problems with a lot more seriousness. 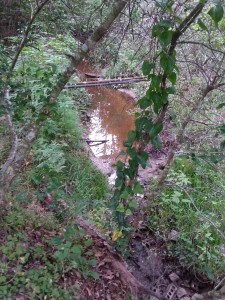 Water, as those of us who live on wells know, is a precious and critical commodity. We should be guarding it with our lives, preserving and protecting it. We don’t. We waste it in showers and toilets and sinks, never thinking about the time it will run out. When it does, we realize that we really can’t do without it.

I’m thinking of building an outhouse. Easier than carrying buckets of water. But, somehow, bathing in the muddy creek just doesn’t appeal. Thank goodness Hubby has rented a room at the Motel 6. I’m headed there now.

Save our water. It will run out.