The Joys of Not Traveling

What is it that inspires some people to go traveling? I have several dear friends who are constantly on the go. One cruises nearly every month. Another sets off for bike trips across Europe or the Balkans or the Middle East or India. A third can find the best restaurants anywhere in the Southern United States.

Sometimes the trips are wonderful and sometimes there are hitches but my friends come back insisting on the benefits of travel. I enjoy sharing their pictures and the stories of their time on the road. During the last six months, since Hubby has been laid up, that’s as far as my traveling extended.

I found an article from the New York Times of May of 2016 by David Seminara. It is titled “The Seven Joys of Travel, From a Joyful Traveler” and introduces his readers to one Thomas Swick, a travel writer who has written:  “The Joys of Travel: And Stories That Illuminate Them.”

According to Seminara, Swick “draws on a lifetime of travel wisdom and experiences in sharing his seven pleasures of travel: anticipation, emotional connection, movement, novelty, discovery, break from routine and heightened appreciation of home.” 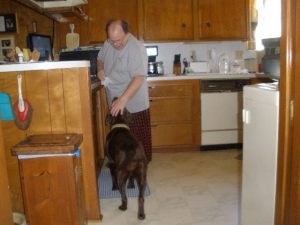 Of all of those, not one refers to or reflects the ideas of my beloved spouse, Hubby Flatbottom. (That is the pedicurist’s name for him). Travel, or even leaving the house is anathema. And he is perfectly happy with his lifestyle.

His only anticipation is driving to Wal-mart every two weeks. And that’s as much movement as he gets, too. Except for the Physical Therapy he is being subjected to since his heart surgery.  He has no emotional connection to anywhere because most places are crowded and hard to get around.

There is neither novelty or discovery that attract him. I can promise that Hubby has not “lost anything at any of those places.” And he doesn’t plan to go looking for anything that might have been lost. As to routine, he is very happy with his routine at home. And he appreciates home more than any possible spot on the earth.

It is likely that, for some, not traveling is a pleasure, too. Certainly I won’t ever get Flatbottom on another cruise. There is an option, however.  I’ve seen the new headsets that project images so you can “see” and “do” things in virtual reality. Is that where we are headed in the future? Shall I get him one for Christmas? 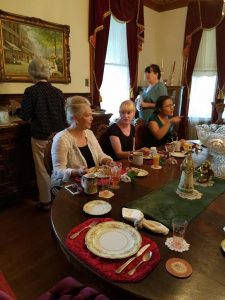 Breakfast at The Victorian Inn, Galveston

There is a young television producer who is filming a new show called “Bucket List.” He televises places around Texas that people might have on their bucket list. But he doesn’t take them there. It is virtual reality.

I agree with my traveling friends. I believe in the reality of a breeze off the ocean, the sun warming your face as it rises beyond the temples of Angor Wat, or the sweat dripping off your forehead as you walk the road to Santiago de Compostela.

And the taste of delicious omelettes and fruit pastries at the Victorian Inn. And elicit skinny dipping in the Far View Inn pool at midnight with the rain drops spattering on the sparkle lights in the dark trees. And the smell of Paula’s grill cooking. And the taste of wine. And laughter shared with friends.