The Joys of Students – A Folk Festival Wedding 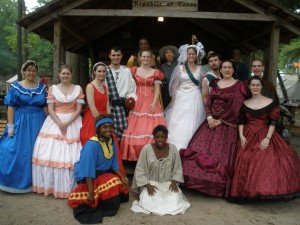 Public History classes can take many forms. When there is a Folk Festival at our Sam Houston Memorial Museum every May, the possibilities become endless.

Public History, for those of you who wonder, is a course that deals with hands-on history, whether it is museums, libraries, building cabins, or, in this case, helping out at the Sam Houston Folk Festival. Sometimes it is cooking in Dutch ovens to feed the masses (I’m sure there will be another blog on that), other times it is portraying historic characters.

During the Spring of 2009, our Public History course included creating costumes. Every year, in order to help provide “historic” personages for our Folk Festival, our students dressed in costumes that (sort of) represented the period from the Texas Revolution to the Civil War, 1836-1860. Never mind that there were zippers in the dresses and the satin wasn’t quite accurate, but the students loved playing the part of some of Texas’ history’s famous and infamous characters. 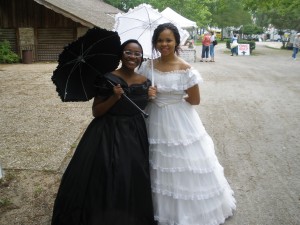 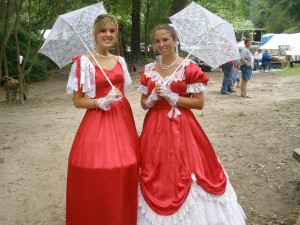 Over the years, by using Student Activity funds—this was, after all, for student activities—we amassed quite a collection of costumes. But we always needed more. I decided the students needed to learn to sew their own. With a little begging and pleading, our University Home Ec Department (it has a much fancier name now, but that’s what I called it) gave us permission to use their sewing machines and their spacious, well-appointed clothing labs. 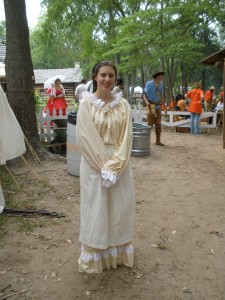 I’ve done some sewing in my past, even took a Home Ec course or two, but to say I know much about the construction of costumes would be a stretch, a very long stretch. Nothing daunted, each student decided on a costume they wanted to make. They bought cloth and I helped them pick patterns and cut out the costumes.

The sewing was, well, a trifle challenging. Seams didn’t quite come together. There were bulges in waistbands, skirts didn’t hang quite correctly, pants had gaps, and sleeves were finally left out entirely. But the outfits were wearable. 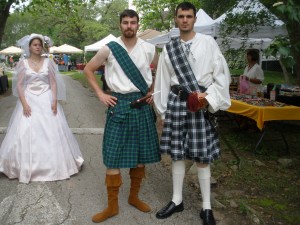 Two of the young men wanted to make Scottish kilts. Sam Houston was, after all, of Scottish origin. They researched their own backgrounds and found out the correct color and pattern that their ancestors had actually used. Buying real Scottish wool, however, is horrifically expensive. On top of that, a real kilt requires more than 20 yards that are folded around the waist and draped over the shoulder. We made do with less expensive cloth. The boys did, however, learn to sew their own shirts although one left out the sleeves. 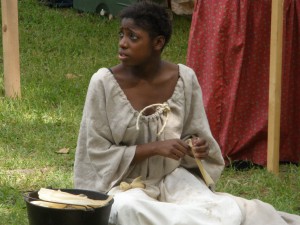 My two African-American girls chose to do historic styles as well. One based her costume on what Free Black Seminoles would have worn. We learned how to make the intricate basket-weave pattern that Florida and Oklahoma Seminoles still use today. To our surprise it isn’t difficult. My other student chose to use a burlap sacking that would have been accurate for a slave girl and made little corn-husk dolls to give away to passers-by. 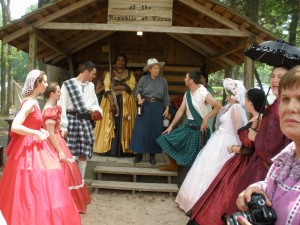 Come Folk Festival time, the students all donned their costumes. I’m not certain how it happened but they decided we needed a shotgun wedding. With creativity and ingenuity, they planned out the whole scenario. With an appreciative audience, our two Scots fought over the bride. With whiskey bottle and musket in hand, Mama Kay and the Judge finally carried out the wedding on the front porch of the cabin to many cheers and much hilarity.

The costumes may not have been either accurate or elegant, but a grand time was had by all. And the bride and groom were happily wed.