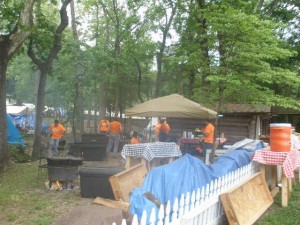 The cooking for volunteers started small.

The Folk Festival at the Sam Houston Memorial Museum in Huntsville, Texas has been going on for close to 20 years. It began during a period when the Texas legislature, in its infinite wisdom, decided to defund museums and let them sink or swim on their own. The community rallied to help and started the Festival with volunteers. Their intent was to help raise money for the museum. Our museum sits across Sam Houston Avenue from the State University of the same name. It is located on the last remaining 16 acres that once belonged to the Hero of San Jacinto himself. While Sam Houston was a Senator for the State of Texas (after 1845), he bought up the property in the small town of Huntsville and built a house where he left his wife Margaret and their various children. The land was rededicated as a museum during the 1936 fervor over Texas’ 100 year anniversary. 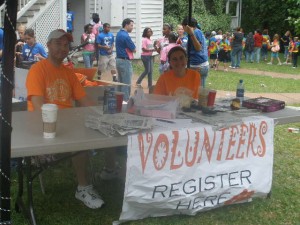 Our students, many of them members of our Webb History Society, became involved as volunteers. They helped with activities such as taking tickets, handing out programs, and helping with the Childrens’ Tent. They also became “Ask Me Who I Am” historic characters in (not really) period appropriate costumes. The students often worked three-hour shifts to help out. Since the event takes place in early May, it was also a good way for them to earn extra points at the end of the semester.

My concern was feeding the troops. Students are always ‘starving’ so one year we got bread, sandwich meat and drinks to keep them working happily. We laid out the spread in the log cabin that doubled as a store and the students rotated through during their shifts. The next year, it got a little bigger, but this time, the university contributed money to their feeding. 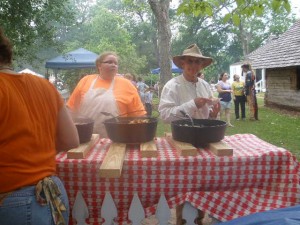 And then . . . . As often happens, the idea took on a life of its own. The feeding program became historic. Blessings on David Payne (he always called me “The Pickpocket”), he provided student activity funds to purchase Dutch ovens. Slowly, with purchases over the years, the ‘set’ soon consisted of six large boxes that each contained a full set of 45 pieces: 14”, 12”, 10” Dutch ovens, stew pots, frying pans, cooking pots, tripods, hooks, and long-handled spoons, spatulas, forks, lid-lifters and small coal shovels. We had to add wood boxes for historic plates, cups, and flatware. 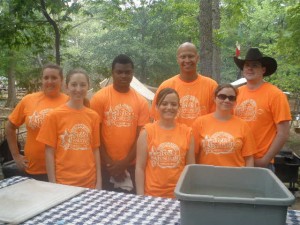 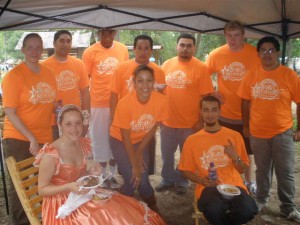 But who was to do the cooking? I knew nothing about cooking with Dutch Ovens, but I had friends. Larry Molitor, Kay Cooks, and Paula Turner were all well versed in the art. Every Folk Festival, we turned students into top-notch Dutch oven cooks. The students peeled potatoes and carrots (many of them for the first time in their lives), cut up onions and meat for stews. Others learned to make corn bread, biscuits and even such delicacies as pineapple upside-down cake.

We didn’t plan to be in competition with the various food vendors on the grounds. When our dinner bell rang, however, every reenactor on the grounds, plus the officers on duty out on the street, and friends and families joined the students to line up for the food. We even cooked for the prisoners who helped set up and take down the festival.

Many of the students have since gone into teaching. I hope that some of them are using their new-found skills to teach children how to do Dutch-oven cooking. It is a skill that, thank goodness, the Boy Scouts still practice, as do reenactors everywhere. Now our students can proudly say that they can do Dutch oven cooking, too.

Feeding the masses has gone by the wayside today, but it was an experience none of us will ever forget.