The Pros and Cons of Conferences and Conventions

Is it wise to take time off to attend a Writers’ Conference?

This morning, as soon as I post this blog, I am headed for Houston to a Writing Day Workshop. Then on Monday, my cousin and I are headed to San Miguel de Allende, Mexico for a week-long Writers’ Workshop. And Tuesdays I belong to a Writers’ group here in Huntsville. And Wednesdays and Saturdays, the Woodlands Writers’ Guild meets 60 miles south of here. And once a month on Thursday evenings, there is the Writers’ League of Texas gathering in Austin, several hundred miles from here. You get the picture.

I don’t think all this ‘attending’ is something Nora Roberts would do. She would be working hard writing her next book. I remember a rather acid comment from her when someone asked her how she had so many NYTimes Best-Sellers. “Because I work hard at it. It’s my job—eight to five, every day.” Me? Obviously, not so much.

Last night my beautiful friend Nancy (she of the blue, blue eyes) shared her experience of attending Nora Roberts’ book signing and gathering at her Boonsboro, Maryland home. Nora had invited several other authors to share the book-signing table with her. It was the chance of a lifetime for them, and a chance for Nancy to buy the books of other authors. I will have to go one day since I, too, am a fan, but it is expensive and it takes time (see Cons, below).

Nora Roberts, a prolific author of action/romances (214 at last count according to her Web page), offers her fans a chance to come meet her and enjoy her town. She owns the hotel and it appears that her family owns a good bit of the rest of the town as well, from restaurants to bookstores. She has reached the pinnacle of publishing by writing all the time. Did she ever attend Writers’ Workshops when she was learning the craft? I wonder.

Chuck Wendig, at his website ‘terrible minds,’ wrote an extensive blog on the pros and cons of attending “CON”s – conventions. It seems there are hundreds of them, everywhere. He argues for the benefit of meeting other writers in your field and perhaps even finding an agent or a publisher. He also suggests we can learn new things, benefit from creative ideas, and come away energized and ready for more and better writing.

He says one might also sell some books. A word about that. Don’t ever hope to sell books to teachers. Two sessions at Region 4 and Region 10 this past week and not a single book sold. Thanks goodness I got an honorarium for one of them, but not the other. Expensive, time-consuming and unprofitable. And men are even worse. After selling $400 worth of books to the Daughters of the Republic of Texas a while back, I sold one—for $10—to the Sons of the Republic when I spoke to them in Houston. Got two other gigs out of it but was it worth the expense? 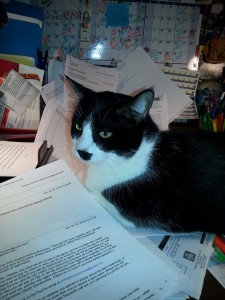 Conferences are, however, tax deductible. Feeling guilty at not getting the taxes finished, I sit staring at the stack of travel receipts on my desk beside me – under the cat – who has expressed his view of them by urping all over them. They are drying out now.

Chuck also recommends being a fan, if you don’t have books of your own out yet. Get to know other authors in the industry. Enjoy learning from authors you enjoy.  Who knows, you might meet Nora Roberts and be invited to one of her get-togethers!

The cons about “CON”s are the expense, the time-drain, the distinct possibility that some of the panels will be completely useless, the slim chance of selling books (see above), and the cost of hotels, meals, travel (yes, they are tax–deductible, but still, is it worth the effort?). 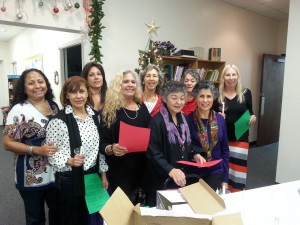 There is also the stress of going if you know no one. Some people, like my brother and his son, Spicy José, can make friends by walking into a room. I’m not quite that outgoing. There are, I know, some awesome, wonderful people at conferences and conventions and Writers’ workshops. They may become bffs. Finding them is the problem. There are also a lot of young, self-centered, navel-gazing introverts who are not interested in anyone but themselves and having someone listen to their pitch. Usually, the good outweigh the bad.

So, time to go to another conference while behind me lies my manuscript–waiting  . . . .