As many of us Baby Boomers reach, approach or exceed that milestone, some choose to ignore the date, others have a quiet gathering or perhaps a nice dinner. Still others, like my friend Lolita, go for the gusto—an all-out, budget-busting, fandango in the Spanish style.

She began planning this probably a year ago, determined to invite every friend and family member she had to come enjoy dinner, dancing and carousing. Her party focused on her many years of travel. Hence the party theme – “Around the World in Seventy Years.”

And thank goodness for Oriental Trading Company. If you have a theme, they will provide flyers, backdrops, decorations and every conceivable kind of party item that the avid mind of the capitalist entrepreneurs can conceive. Have you ever seen their catalogues? If you haven’t – Google them. It’s astounding. I’m still using some of the plastic glasses from a Hawaiian themed wedding we did a few years back. The stuff is cheap enough to throw out, but it is also reuseable for years. 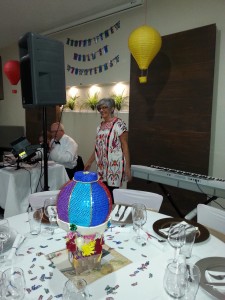 There is also some company that will make posters with whatever picture you provide, very inexpensively. This isn’t Kinkos for $15 a poster. This is $2 and shipped overnight. Lolita sent pictures of all the various places she and her delightful husband Eduardo had been and, like magic, in two days, they had posters for the walls. Her daughter Teni also found a beer or maybe it was a soda (Jones, I think) company that will put your picture on their label.

Creativity, however, was the name of the game. She labored (and since she isn’t craft-oriented, she really suffered) over creating beautiful center pieces that looked like the hot air balloons from the movie, “Around the World in Seventy Days.” Each basket was filled with bright flowers.

And the passports – again, thank you Oriental Trading Company – were based on the many places she had been. We made an assembly line process to paste in pictures of Lolita on bikes, buses, trains, carts, and planes. They were fun reminders of her travels that we could all enjoy vicariously.

It just occurred to me, she could have had a repeating loop on a screen overhead with the hundreds of pictures of all the places they have been over the years. Maybe she was sparing us those mind-numbing travelogues that friends and relations always subject us to when they return from outer Mongolia or the safari to East Africa. Hers were very discrete posters on the walls.

Dancing the night away

It was a party that will last in memory for some time!