I didn’t realize that everyone and their dog is writing about Malinche.

I just started a book by Laura Esquivel called Malinche. It is edited by Johanna Castillo of Atria Press (Simon and Schuster), and published in 2009. It is by no means the only book on Malinche but it is one I particularly liked. 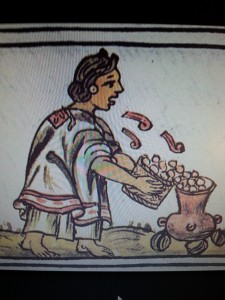 Malinche or Malinalli (later baptized as Marina) has always appealed to me as a fascinating woman, a survivor, and an amazing historical character. She was given as a slave by the Maya to Hernán Cortéz in 1519 and became his interpreter and translator throughout the years of his conquest. She bore him a son, Martín, the first (or at least best known) of the new race of Mestizo or mixed-blood children. Cortéz eventually married her off to Juan de Jaramillo with whom she had a daughter, María. She died, some suggest, in 1525, others say 1555. Whichever date is correct, she left a huge heritage, one that shifts from positive to negative depending on the time and the reviewer.

It was difficult to adjust to the style of Esquivel’s writing at first. If you have read Como Agua Para Chocolate (Like Water for Chocolate) also by Esquivel, you soon realize what you are in for. It has the same mystical quality, similar in many ways to Gabriel Garcia Marquez and his ‘magical realism.’ Once you appreciate that style, and the very ‘Mexican’ imagery and feeling of the book, it is fascinating.

Esquivel does a good job of the historical background and has carried out careful research. It is not a love story. I felt she did an excellent job of portraying the conflicts within Malinche over her love/hate relationship with Cortéz and the destruction of the Aztecs. It should be noted that she was not a Mexica (or Aztec) and therefore had no reason to be loyal to the empire. Only in hindsight do some people claim that she was a traitor to “her people.” That is a charge I find particularly unfair. In the first place, the Aztecs were not ‘her people’ and in the second place, what choice did she have?

One reviewer who calls herself The Feminist Texican (I can’t find her name anywhere on her website) https://thefeministtexican.wordpress.com/2010/08/02/review-malinche-by-laura-esquivel/) really disliked the book. She wanted to abandon it but finished it anyway. She claims there is no “believable love story here” and that “the writing is just bad.” No, it’s not bad, it’s just different. And if the reviewer had been familiar with the ‘magical realism’ prevalent in the writing of many Hispanic authors, she might have appreciated it for what it was: an excellent study of the conflict that Doña Marina/Malinche/Malinalli/Malintzin faced.

Among the recent additions to the topic are two that look particularly promising. Malinalli of the Fifth Sun  by Helen Heightsman Gordon (2011) and Goddess of Grass by Ed Morawski (2011). You can check out Wikipedia under “Malinche” if you are wondering about others. There are lots! <https://en.wikipedia.org/wiki/La_Malinche>

If I had time (my ‘reading’ takes place while walking the dogs or driving long distances), I might read them, but they aren’t on Audible. Rats!