Tidbits from History – On the Bourbon Reforms

Change is always difficult for a society.

As we look forward to the upcoming Presidential elections, we all wonder what the future will bring. The only thing we know for sure is that there will be change. Are people’s attitudes and opinions going to change with the arrival of a new president? Will the “new” Republicans create a society of aggressive authoritarianism? Or will a woman president be blasted with more hatred from those who oppose the Democratic/Socialist ideas? All we can tell for sure is that the changes will be difficult.

Perhaps we can learn a little from the Bourbon Reforms. They occurred in New Spain during the middle of the 18th century – from 1759 to 1788, the years of Bourbon King Charles III. These changes truly upset the apple cart and eventually led to independence movements throughout Latin America. How did the people of New Spain react to the reforms? How did they survive the changes? It’s a topic I deal with in my novel, The Spanish Captain’s Daughter. Louis XIV and his grandson, Philip of Anjou, the first of the French Bourbons, had taken over Spain in 1700, or more properly, after 1714 and the end of the War of Spanish Succession. They were appalled at the pathetic condition of the Spanish Empire. There was almost no military, the government was in disarray, the country bankrupt and in debt. There existed a total lack of trade and commerce, and all of this in spite of the flow of silver from the Spanish colonies.

As with all new governments, the “afrancesado” or Frenchified Spanish Bourbons immediately took it upon themselves to reform the society. The greatest changes occurred during the reign of Charles III. His plan was to restructure the economy, strengthen the crown, modernize Spain, and stimulate manufacturing. He also sought to make the administration of his colonies in the New World (for colonies, read local and state governments) more efficient by promoting economic, commercial and fiscal reforms.

And, as with all changes, there are those who benefit and those who suffer. In the case of New Spain, the local governments had been run by residents known as Creoles or criollos. Proud of their Spanish heritage, these were citizens born in the New World of Spanish parents. They were not mixed-blood mestizos and prided themselves on being free of any taint of Indian blood. Charles III planned to make his empire more efficient by replacing these powerful Creoles with people whom he felt would be loyal to him, direct from Spain. Outsiders all, the new arrivals faced massive opposition from the entrenched government leaders.

Charles also decided to help by changing the tax structure.  (My goodness, how familiar that sounds!) For nearly 300 years, the King had the right to claim his “Quinto” or King’s Fifth (20% of all goods produced in the New World). What he learned was that the wealthy, in particular the well-connected Creoles, had avoided paying taxes for years. Thinking to please everyone, (we all know how well that works) Charles lowered the taxes to only 10%, but he sent efficient tax collectors from Spain to crack down on the tax dodgers.

Trade also came under his scrutiny. Profit became the watchword. But when local communities attempted to manufacture goods in order to provide jobs for their citizens and improve their economy, they were prohibited from doing so. The goods sold in New Spain came from overseas—mostly Spain and Belgium, and Great Britain.

In an interesting historical side note, Spain had borrowed heavily from Dutch bankers to fund their wars. When the Spanish galleons arrived with silver from the New World, the silver went straight into the pockets of the Dutch money lenders. When the Spanish needed war materiel, they looked to the Dutch to supply the goods. The Dutch, in turn, bought the supplies from Spain’s arch enemy, the British. They resold it to the Spanish, at a healthy profit. It was Spanish silver, therefore, in this round-about route, that actually fueled the English Industrial Revolution.

It was during this period that the America colonies rebelled. In his hatred of all things British, Charles III quietly, and at first, secretly, offered support to the American colonists.  This was a dangerous liaison. His own colonies might get ideas about things like independence and liberty and rebellion. But Charles felt certain the reforms he had instituted would keep his subjects loyal to Spain. 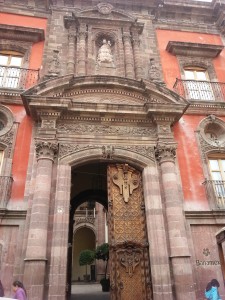 By 1788 when he died, Charles III had made his empire efficient, effective and profitable–for some. The thousands of magnificent stone palaces and churches you can see throughout the silver towns of Mexico were built by the wealthy miners, merchants and hacendados during this period. The ousted Creoles were given a chance to salve their wounded pride by being allowed to join the new militias and parade around in fancy uniforms. It gave them a sense of prestige that the king hoped would keep them loyal.

It didn’t. The local people who had been denied jobs that had gone overseas, the poor and downtrodden Indians and mestizos who had paid the taxes that the wealthy avoided, rose in revolt in 1810. Finally, the Creoles joined them to oust the Spanish overlords and create an independent Mexico in 1821.

Will there be changes with the new government, whoever runs it? Of course. Will the changes be for the better? Perhaps. Will there be riots in our streets, as Trump threatens? Who is to say?

A familiar caveat comes to mind. Those who fail to learn from history are doomed to repeat it.