Tidbits from History – The Spanish in Mexico

No, the Spanish DID NOT kill off all the natives of Mexico.

I write in support of my friend Joe Lopez and his article on the European conquest of the New World in the Rio Grande Guardian. He compares the conquests of the Native peoples by the Spanish and the English. An interesting comparison.  First, a little background on the Spanish side. Mexico City, as all my Mexican friends will tell you, was originally known as Tenochtitlán. The valley of Mexico had been settled for hundreds of years by a variety of peoples and the Mexica were late comers. According to legend, they came from a place far to the north called Aztlán. Many Californios insist this was California. Hence, the name Aztecas.
When the Mexica arrived in the valley, they found the land surrounding the lake was already divided up among other tribes. They settled on an island in the lake where they found the symbol they had searched for: an eagle perched on a nopal cactus devouring a 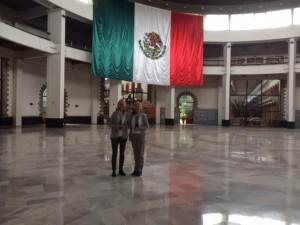 serpent. That symbol is on the Mexican flag today.

The Mexica offered their services as soldiers and mercenaries to the surrounding tribes. It didn’t take them long to conquer the whole area. As their empire expanded from coast to coast to include many of the other native peoples, the Mexica used the profits from taxes to build Tenochtitlán. 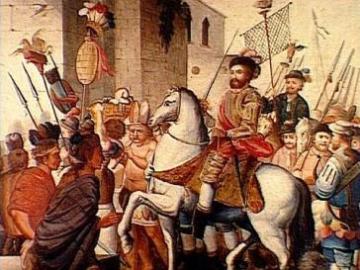 By 1519 and the arrival of the Spanish, Bernal Díaz del Castillo writes in amazement about the immense city they saw spread out in the valley below them, bigger than any in Europe, home to nearly a million people. The impressive Venice-like city had huge temples, busy markets, floating gardens (today Xochimilco), schools, and even zoos. An intricate network of canals and nightly sewage removal kept the city pristine. They also had a standing army of over 100,000 men.

How, then, did Hernan Cortéz conquer this huge city with a tiny army of 500 Spaniards? It took him two long and bitter years, from 1519 to 1521. After a severe defeat in 1519 which ended in the “Noche Triste” or Sad Night, he made alliances with other native tribes also interested in bringing down the Aztec empire. With their help, and the devastating spread of disease through the densely populated city, he slowly closed the net. By 1521, Cortéz brought the city of Tenochtitlán to its knees. Think how easily we could shut down a city like Houston today by blocking the Interstates and halting all those Wal-mart trucks. Mother Nature does it to us all the time.
The whole purpose in conquering the New World was, as we all know, Gospel, Glory and Gold. The loss of so many of the natives to disease was devastating for the Spanish. They NEEDED them as workers to run haciendas and dig out the gold.
Rather than killing off the natives, the Spanish stepped in at the top of the pyramid (so to speak) and took over the government. By wisely putting the Aztec tax collectors and bureaucrats to work for them, the Spanish took over an immense empire with minimal effort and little bloodshed. 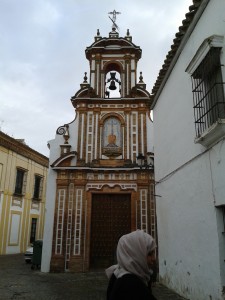 The key ingredient was not the sword but the cross. After 700 years of fighting the Moors, and intense opposition to the newly created Protestant religion, the Spanish, in particular Ferdinand and Isabella, were determined to bring Christianity to the natives of the New World.

Dedicated and determined priests arrived in the New World to spread the Catholic religion. Instead of wiping out the old religions, the priests used ‘syncretization,’ or combining the existing native religions with Christianity in order to convert the local peoples. Although many towns still speak the native languages and use ancient ceremonies, they are all Catholics and there is not a town or village in all of Mexico that doesn’t have a Catholic church, chapel or cathedral.

You’ve never heard of any great bloody battles or great massacres of native peoples in Mexico. That’s because there weren’t any. Yes, natives were forced to work on the haciendas or in the mines, but Mexico and their Spanish Conquerors had no Wounded Knees or Custer’s Last Stands or even any Trail of Tears. And no reservations. Look around Mexico today then look at the United States. Where do you see the most native peoples?

No, the Spanish DID NOT kill off the native peoples of Mexico.