With Facebook and Instagram and Twitter and constant Texting, is it necessary to send Christmas Cards? I’ve noticed that many people have reverted to just posting a Christmas greeting on Facebook. Easier, faster, simpler and a LOT less expensive. But is it the same?

I asked Sister Sara if I should send out Christmas cards this year. Do people appreciate them? Read them? Put them on the mantle with the stockings? Or do they just get tossed in the trash? Do they really make a difference?

Yes, I think they do. There is something magical and special when you open a card to find three Wise men in glittering gold foil, or the brilliant sparkle of snowflakes, or the magnificent beauty of a Renaissance Nativity scene. The variety of choices is amazing and I’ve never received two alike. 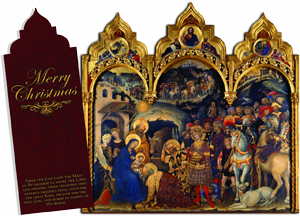 How to choose between them? In Hubby Flatbottom’s case, it’s the ones on sale after Christmas. Ours are sparkly this year but they aren’t what I would consider “special.” Those lovely ones are usually gone from the Wal-mart shelves right about the time Halloween decorations come down. And the really beautiful ones are insanely expensive. Hubby Flatbottom (if Wal-mart doesn’t have it, you don’t need it) doesn’t share in the process of writing, stuffing, labeling, stamping and mailing. So Wal-mart’s cast-offs are all the same to him. He doesn’t quite have the same feeling for beauty.

When we did decorate for Christmas, the cards always found pride of place lined up along the mantle. They bring happy memories of friends we don’t hear from all year long. They’re proof that we are thought about out there somewhere by someone, and—since I have to make sure they received one from us—that we are thinking of them. And even if the card just has a signature, it is still a welcome addition to the line-up.

Ah, but the Christmas letter! Those are special. I love a Christmas letter because it brings news of kids growing up, of family travels, of births and deaths, graduations and marriages, and often family pictures. To me, the Christmas letter, time-consuming and repetitive though it may be, is never obnoxious. It is truly precious. I want to know what has happened in my friends’ lives. A signature just isn’t enough.

Some of us old foggies insist on a hand-written note. Back in the days before copy machines, each letter was laboriously written out in long-hand.  I did a couple of those this year, but I’ll admit that typing one letter, and now adding pictures, is much quicker. Everyone wants to know the same things anyway, don’t they? But how much to include? What can you fit on a single page? There is the challenge, for me, at least! I’d love to blather on but have to cut and cut and cut until my life for a year squeezes onto one page–with pictures.

And then there is the religious problem. Is Christmas about Christ? Madison Avenue and Wall Street would argue otherwise. Some suggest (I think it’s a commercial for someone who wants you to buy something) it’s not about “LOVE” but about the bottom-line “SALE.” Frantic purchases just to have something, anything–sometimes ridiculous, wasteful anythings–to put under the tree. What do you get someone who has everything? Let them buy it themselves?

Some of the politically correct would insist that greetings should be for “Happy Holidays.” That includes everyone and their beliefs. I admit, I hesitate to use the word Christmas with some of my friends, but I still send them cards. Whether they approve of the season or not, I still want them to know I love them and am thinking about them. Shouldn’t it be politically correct for others to respect the views of those who do believe in a Christ-centered Christmas as well?

I’m an old foggy, and I’m not politically correct, so I say Merry Christmas and a Happy New Year anyway!