To Decorate or not to Decorate

The amount of money, time and effort that is spent on decorating for Christmas could, without doubt, solve the national debt problem, or at least come close.

Sunday at a cookie gift exchange, one of the church ladies bemoaned the fact that she had not decorated for Christmas. She wasn’t elderly, maybe mid 60s (okay, to some that’s elderly, but when you are on the other side of that divide, it ain’t!), but she had become incapacitated by some accident and couldn’t hang the ornaments. She was distraught to the point of tears.

My beautiful sister-in-law sent pictures of a giant tree in their living room. Bro Joe was going to have to climb a ladder to finish decorating the top. I teased her about the immensity of the project then asked, just joking, if she was putting a Christmas tree in each bedroom. Of course she was. 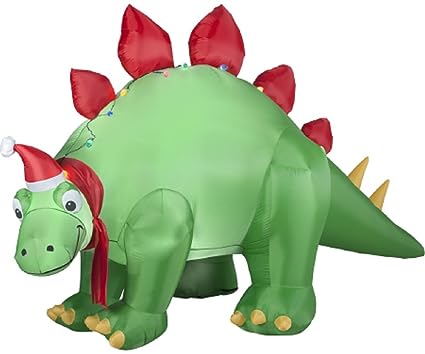 Some people here in town decorate by filling their yards with inflatable Christmas figures. They have become so convenient—flatten them out and fold them up after Christmas—that people don’t hesitate to buy dozens. (Thank you, Oriental Trading Company).  One homeowner, across the street in the neighborhood where I walk the dogs, has put up an inflatable dinosaur with a tail that wags. Driving back and forth across Austin, I was left speechless when I started down Loop 360, or Bee Caves Road. For miles, every benighted and decrepit cedar bush, up and down the rocky hillsides along the side of the road, was decorated for Christmas, each one sparkly, colorful, different, unique. Each one, however, decorated only as high as someone could reach without a ladder. And the environmentalists have insisted that people come take DOWN their ornaments after Christmas, too.

Then when the homeowners up in Lomas, one of the wealthy neighborhoods, wanted him to decorate their front gates for Christmas, he built giant ten or fifteen-foot tall wood and papier mache snowmen, Santas, reindeer, sleighs, angels and nativity scenes. Impressive, but those you could not flatten and fold up!

I used to follow in his footsteps. For years, while I was at the university, I made wreaths for my colleagues to hang on their office doors. Each wreath was decorated to represent their particular hobbies or interests or families or background. Thank goodness for those busy little Chinese workers. Hobby Lobby or Michaels or those giant chain stores always had some figurine or decoration I could use. And the garlands and ribbons and bows and ornaments for the halls . . . Can you believe I never took pictures of any of it?

I also used to decorate the house, too, elaborately. Now, in retirement, I don’t do much of anything. I’m not incapacitated, just lazy. All that effort for a few days of glitter and lights? Why bother? We’re so far out in the country that no one would see it, and no one comes for Christmas anyway. Does that sound Scrooge-like? 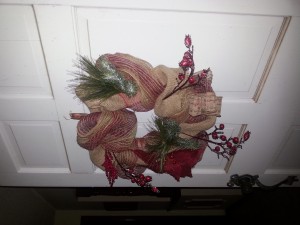 Hubby Flatbottom, however, still decorates. Two strands of shotgun shell lights, a $3.99 wreath for the front door from Wal-mart (if Wal-mart doesn’t have it, you don’t need it) and the snowman night-light we won at the Christmas gift exchange last week.

I console myself with the thought that Christmas is not in the decorating, but in the heart. So, if we do decorate or don’t, it doesn’t really matter. Let’s just be grateful for family and friends and the love and kindness of the season.

And I’ll be grateful there isn’t much to take down, pack up and store away.