Turn of the Century Hotels 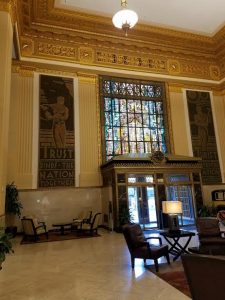 How delightful to walk into the lobby of the Drury Plaza Hotel in downtown San Antonio. No cold, heartless steel and glass modern edifice here. I can’t help but feel the wonderful history of the place and wonder about the people who walked through here and looked at the same elegant décor.

The Drury Hotel is a 1929 Art Deco building that at one time housed the Alamo National Bank. Its elevators still bear the ANB brass plaques set into the floor. Its lobby has 50-foot ceilings and gold trim along the walls and columns. A magnificent stained glass depiction of the Alamo graces the wall between two immense bas-relief carvings of male figures declaiming “Trust binds the nation together.” Well, maybe not so much. 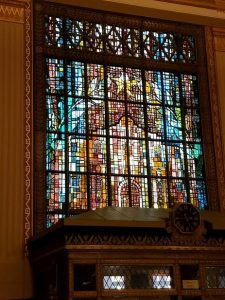 The magnificence takes on a whole new meaning when you think about the time period. The ostentatious gold and glitter were part of the Roaring Twenties. A time of lavish over indulgence. Then suddenly, in October of 1929, that magnificent bank joined thousands of other banks as Wall Street crashed and the nation imploded. It was the beginning of the Depression. Did people come in here begging to get out their no-longer available funds? Did they glare at all that gold and extravagance?

While I was working on my Masters in Architecture at Texas Tech in Lubbock, I found out I was a pretty rotten, no, make that pathetic architect. My drawings, that we posted weekly, were mostly stick figures with little square houses with curlicue smoke rising from the stick chimney. Other students were putting up drawings of sweeping panoramas with detailed brickwork and ornate and elaborate renderings.

Perhaps cravenly, I returned to my forte—history—and switched to Architectural Preservation. While withstanding the dust storms on the Staked Plains of Far West Texas, my heart had returned to the lush tropics of St. Augustine and Tampa, Florida. My thesis became, if I remember correctly, “The Restoration, Renovation and Reuse of Two Turn-of-the-Century Florida Hotels.” Which, of course, I had to visit in order to complete my research.

During the 1890s, railroad trains had made it possible for ladies to travel in comfort and style. Railroad magnates like Henry Flagler and Henry Plant realized the possibilities for profit in Florida. On the East Coast, Henry Flagler extended railroads all the way down to Key West, building giant hotels all along the way. Plant did the same for the West coast of Florida, extending his line to Tampa just in time for the Spanish-American War. 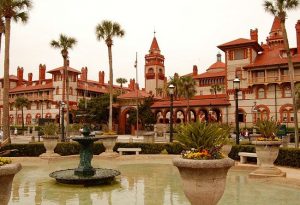 Flagler’s hotel, built in Spanish Renaissance style, became the Ponce de León Hotel in St. Augustine. He also built others in Palm Beach and Key West. In keeping with the modern outlook of the turn-of-the-century, Flagler built his hotel out of poured concrete. It was the first such hotel structure in the United States. Like the Drury it is magnificent. Frescoes and murals on the dining room ceiling, magnificent carved mantels and columns, exquisite statuary and chandeliers fit for Versailles.

Flagler went on to build his railroad along what is today the Overseas Highway. He built it out of poured concrete also. The problem there is that cracks in the concrete exposed the internal rebar to the corrosive effect of saltwater. Ever since then, as you drive down the Overseas Highway, you can see concrete cracking and falling off as the State of Florida spends huge amounts trying to preserve the flaking concrete. 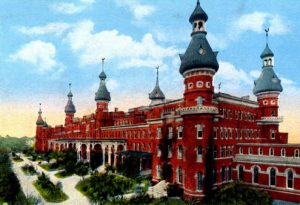 On the West coast in Tampa, Henry Plant built his hotel as the last of the Moorish style hotels. The building is wood but uses magnificent Moorish arches copied from such places as Granada and the Alhambra. Up inside the minarets, I got a chance to see the giant wooden beams of Florida Yellow Pine. The wood is so strong that even the termites can’t tunnel in more than a quarter inch..

Fortunately, both hotels have been restored and turned into colleges. The Ponce de Leon is today Flagler College. The Plant Hotel is today the University of Tampa. Hopefully, students appreciate the beauty of these two historic hotels, although I find that students become inured to their surroundings.

Meanwhile back in San Antonio, I just heard that the Drury Family who bought up and restored this Alamo Bank Building makes a point of buying up historic hotels and preserving them. As we see hotels in Las Vegas frequently being imploded to build new metal and glass structures, I am grateful that the Drurys have sense enough to preserve the past for our future generations. Someone will get to enjoy the loveliness of these old buildings, in particular, me.