Did you know that making a choice is not a simple process? Last night, thinking to be the dutiful daughter, I offered her a choice. Crab cakes for supper or Teriyaki chicken with veggies. All I got was a very confused expression and “I don’t know, you decide.”

Usually she is very opinionated, insisting on her eternal favorite—spaghetti. Somehow, over the last few days, she has lost the ability to choose. I’m no geriatric psychiatrist, and have no clue whether it is the dreaded dementia/Alzheimer’s or just lack of interest. Why can’t she choose?

At times, she can choose, loudly. She had very laboriously washed her sheets and hung them on her clothesline. (I should be thankful she can still dress herself, wash clothes, and even feed herself, sort of). The rope is on a pulley and she can stand on her back porch and clip wet clothes to the line then reel it out into the sunshine and reel them back in when they are dry.

It had sprinkled a tiny bit and they were damp. She has a dryer she doesn’t/won’t use, so I offered to take them to the big house to dry them. She insisted she would spread them on the living room furniture to dry. She didn’t want the sheets to leave her trailer! What did she think? That I would steal them? Destroy them? Burn them up?

Usually, I remain very amenable and obedient. This time I put my foot down. I just said NO! The sheets would dry in fifteen minutes in the dryer, but would take the rest of the night to dry, draped like ghosts on the furniture. I just gathered them up and left the trailer. Sure enough, brought them back fifteen minutes later, warm and dry. Helped her put them back on the bed. 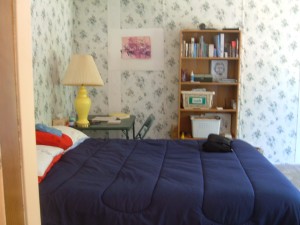 Several months back, when Mom came to stay here, I attended a seminar on Mental Acuity in the Elderly at our local hospital. I hadn’t realized there were so many levels and differences among the various mental slippages that our older relatives go through.  There are all sorts of tests that can be administered to determine levels of mental impairment.

If I take her in for testing, however, she will know that she is no longer the functioning human being she used to be. She won’t be able to deny her inabilities. Maybe it’s better to let her continue to think she’s fine. She wants to think she is getting better. That she won’t fall again. That she is going to make it to 100.

If she doesn’t know she can no longer choose, is she happier? It terrifies me to realize that I, too, will reach that point someday.