Elderly Mothers and their possessions

Are you related to a hoarder? I’m sure everyone has had a glimpse of those appalling TV shows about hoarders who collect prized junk that fills houses and spill out into yards. Mom, blessings on us and thank the Good Lord, is not.

She has spent so many years riding the roads, north in the summer and south in the winter, with husband Al in his car, that she has had no place to collect anything. She is not your typical American consumer.

When I put in the trailer, however, and she settled in, I started collecting stuff for her. I brought her books I thought she’d like, decorations for the walls, plants for the tables, kitchen tools I thought she might use, gardening supplies for her vegetable beds. 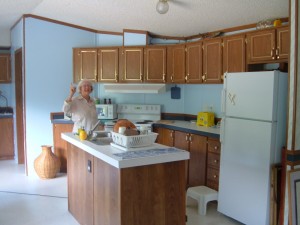 But I also used the trailer to store anything I didn’t have room for in the big house. Spare stacks of party goods—Halloween, 4th of July, Christmas– superfluous pots and pans, extra warming trays, etc. It was my trailer, after all. Or I thought it was.

Now she is divesting her trailer of everything she can. With my sister’s help, (while I was away, the little sneak), the party goods—out; the pots and pans—gone; the warming trays—pitched. She kept only what she absolutely needed. (Okay, I admit, that is probably a good thing).

She also started complaining about the books cluttering up her bookshelf.  For my birthday, she gave me a copy of my own book, a prized hard-copy, no longer available. She was getting rid of it but didn’t want to actually throw it out. Gee, thanks Mom.

When we went to the pool last week, she had concealed in her swim bag two large books, a two-inch thick Tom Clancy and an equally large historical novel. She planned to throw them in the ecologically-friendly dumpster at the Conroe Aquatic Center. Of course, I saved them. I’ll admit it, I am a book hoarder.

I had also laboriously gathered for her a complete collection of Lee Child’s twenty-two book set of the Jack Reacher novels. During her lifetime, she has probably read them three or even four times each. Child is the one author she doesn’t mind reading again. But even they have become persona-or rather- liber-non-grata. She wants them gone.

Her bookshelf, getting emptier

The only two books she clings to are her four-inch thick Webster’s Dictionary and the equally thick King James Bible. My brother made the mistake of giving her a modern version of the Bible and she is going to pitch that too. (Fair warning, Bro.)

Home of the Webster’s

The giant Webster’s dictionary, held up by two marble statuettes that her mother brought back from Italy in 1926, sits on a side cupboard in the kitchen. A few weeks ago, she needed her Webster’s to look up some arcane word. She couldn’t reach it and nearly pitched a fit, struggling and gasping and clawing until she got it out.

The problem? My Sunday School friends and I had been using Mom’s trailer to make jelly for the December Church sale. We erred by piling stacks of jelly in front of her Webster’s. As you can imagine, the jelly is no longer in the trailer, her Webster’s is available, and our jelly-making may have to be rescheduled to the Church kitchen.