Everything you ever wanted to know about Amtrak

It’s a whole new world out here on the rails. And no, the train is not about to disappear in railroad blues, as the song would have it. There are an increasing number of routes run by Amtrak, although there are no other passenger lines. Considering the increasing number of retirees looking for places to go, it is a growing market for anyone interested in helping others see the country. With government support.

Just don’t plan on being on time. Figure in at least an extra day on each end as a buffer. Our particular train was only 5 hours late. It seems there was a track outage around Marfa the day before, and all the trains were shut down for ten hours. That triggered a domino effect of time delays for the southern half of the country.

On the day of departure, (Wednesday, since the trains only run Monday, Wednesday and Saturday), I received a text message from Amtrak that Train 001 had been delayed four to eight hours. Instead of leaving home at 3:00 pm and departing at 6:55, we left Huntsville at 7 pm, picked up our driver Alex in Conroe and arrived at the Amtrak station at 8 pm, expecting a 9:45 departure. Wrong. The train was not due in until 10:45.

Nothing daunted, we drove over into the very nearby theater district and had a leisurely dinner at BirraPorreti’s. 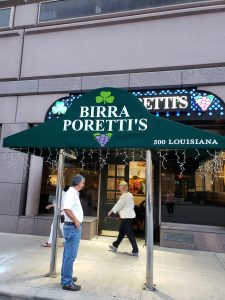 With wine, since we weren’t driving and were looking forward to curling up in our bunks to sleep, soon.

Wrong again. We got back to the station to find that the train was due in at midnight, and, after waiting, 12:30 am, and finally 1:15. There was nothing to do but wait on the hard wooden benches at the station.

By great good fortune, HPD Deputy Kendrick Green, a large, portly, 50ish African-American was on hand to entertain, educate and amuse us for the following almost three hours. He loves Amtrak. He worked for them for a brief time before 9-11 and then when the company shut down a lot of the jobs, he moved over to the Houston police department. But his favorite posting is at the Amtrak station as security guard.

Between Deputy Green and the posters around the walls, we learned everything we could possibly have wanted to know about Amtrak. I thus share it with you now. You, too, will be SO educated.

To go all the way back, during the 1840s, every town worth its salt wanted a railroad line. Houston started with the Buffalo Bayou, Brazos and Colorado RR, a tiny line that connected several of the small towns around Houston. It was said that if you left Harrisburg at sunrise, you would reach the other end of the line at Alleyton, 80 miles away, by sunset—therefore the train is today the Sunset Limited. Those 80 miles of track would eventually become the basis for the the oldest route on the Union Pacific line.

The Civil War had a devastating effect on railroads in the South. Union troops didn’t get far into Texas, but they did reach the hub of intersecting rail lines at Marshall, in the northeast corner of the state near the Louisiana border. Ripping up the track, the troops laid the steel rails on giant fires then bent them into pretzels around trees. And the South had no way to replenish their rail lines. 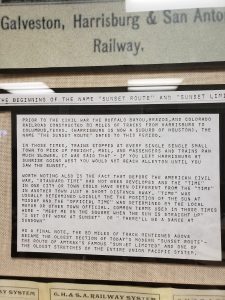 By the end of the war and the beginning of Reconstruction, railroad lines proliferated like weeds all across the country. To encourage railroad construction, Abraham Lincoln and the federal government in 1862 offered the new, young, not yet wealthy railroad entrepreneurs 400 foot right-of-ways, plus ten square miles for every mile of track laid. That amounted to 180 million acres in alternating sections of land along the railroad lines throughout the country.

Anyone who wanted to build a railroad only had to ask. Theoretically, the land could be sold at considerable profit to prospective farmers whom the railroads lured into coming out to visit. Few actually succeeded. Those who did, of which there were at least nine, created a patchwork quilt of land owners across the country.

Texas, too acquired its share of railroads. Since Texas had retained control of its own lands when it joined the U.S. in 1845, only the new state government could grant land for railroads, which they happily did. By 1885, the Galveston, Harrisburg and San Antonio had laid claim to the traffic coming in from the booming port of Galveston.

The 1900 hurricane put an end to the port of Galveston. Harrisburg became Houston and Jesse Jones pushed for the ship channel. Oil became the big money-maker, and Houston became a major railroad hub. Susan, one of our companions, remembers the thrill and excitement of taking the train from Trinity into the awe-inspiring Grand Central Station in Houston. It was an imposing edifice which, regretfully, no longer exists today. 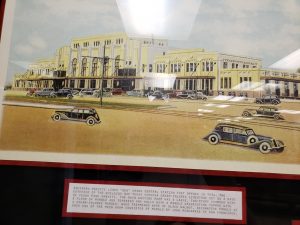 Other railroads, in particular the Southern Pacific, connected Texas to the rest of the country. The Southern Pacific, founded as a line from San Diego to San Francisco in 1865, had reached across Texas to New Orleans by 1883. Three years later, the SP leased the Central Pacific creating a network of over 13,000 miles of track and becoming one of the major networks in the South. It was not to last.

Automobiles, however, were becoming more popular than railroads, and slowly the lines declined, leading to mergers and downsizing. The southern Pacific eventually merged in 1959 with the Central Pacific and the two combined with the Union Pacific in 1996.

It looked like railroads really were going to disappear. There was little effort to repair lines or maintain the tracks. Eisenhower demanded a way to move troops rapidly across the country. He created the Interstate system.

While the country poured tax payer dollars into highways and airports, the railroads languished. East of the Mississippi, the major lines combined to create two roads, the Norfolk Southern, and the Kansas City Southern who divided the routes between them. West of the Mississippi, the Union Pacific hung on, competing with the Atcheson, Topeka and Santa Fe, now merely the Santa Fe.

In reality, however, railroads are by far the best way to move large quantities of goods like coal, gravel, sand, rock, cars and car parts, crude oil, and, now, the huge number of containers coming in from China (thank you, Walmart).

Today, as just one example, (thank you, Deputy Green) a 150-car coal-train weighing in excess of 20,000 tons and driven by two engines at the front and two more at the back, brings coal from Wyoming to the Houston’s electric generating plants at Smithers Lake. Giant cranes lift each car and simply dump the coal out as though it were a Tonka truck toy. Once empty, they dead-head back north for more coal.

The Union Pacific collects $250,000 for each of the four coal trains that run every day from Wyoming to Houston, Texas. That is a total of $1 million dollars a day. And that is just one days’ delivery of one product to one town. Multiply that by the 23 states in which UP has track and the thousands of products that have to be delivered. Little wonder that the freight trains receive priority on the tracks. Amtrak pays only $10,000 a day for their use of the lines.

Still, passenger service is important to those of us who do ride. Amtrak, which was created in 1971 by the National Railroad Passenger Corporation, is owned by the government and therefore has priority, regardless of prices. If it was up to the profiteers, there would be no passenger traffic at all. It is not profitable. Thank goodness for government support and all of our taxes.

Bureaucracy being what it is, according to Deputy Green, trains can also be stopped for any number of reasons. Air conditioning going out. Batteries not operating. Not enough food in the pantry. Or even if the lavatories get too full. One train was stopped for ten hours to bring in pumpers to clean out the trains’ septic tanks. He said that was not our problem.

Today, because of the importance of the freight, the tracks are better cared for. Defect detectors are embedded in the road bed every ten miles. As the train passes over, the sensors can tell if any specific wheel is too hot. Hot bearings can seize up and throw the train off the track. If a detector goes off, the train can be stopped immediately until the problem is remedied. That wasn’t our problem either.

There are also tester trains that run the rails every day searching for weak tracks. Back in the 1990s, a loose track caused a train to derail going over a bridge, killing numerous passengers. This, he said, was what caused the delay for our train, although we didn’t go off a bridge.

A tester found loose rails outside of Marfa. Within the hour, Amtrak had 30 workers and three busloads of supplies out to repair the rotten wooden ties. It took them most of the night while the train waited for ten hours. Old, rotted ties are often a problem, and ties are now made of concrete, especially in the northeast where much of the traffic runs.

The ten hour delay meant the train crew was over their allotted hourly work day. Because they are union employees, their hours are carefully regulated. If they go over their 12 hours, they can request a set-back (we still didn’t understand his explanation) but they can still be paid when they come on later.

The train engineer can make as much as $160,000 to $200,000. Pay rates for the crew of 20 are also commensurate, especially as seniority increases their pay and their job security.  After seven years, the employees have so many benefits they don’t want to quit. When we asked why he didn’t go back to work for Amtrak, he explained that employees keep working until late in life providing few opportunities for new employees to break in. It’s a good job and it shows in the cheerful attitudes of the crew. 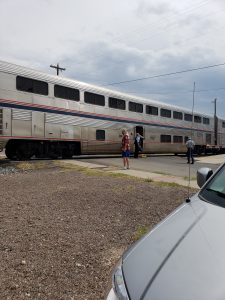 I asked Deputy Green if anyone still had private cars like the Gilded Age magnates. He assured us that several people do, including Dan Aykroyd.  Mr. William Henry, a Houston caterer, owns Creative Charters which has two railroad cars, one a dome-car for partying with roulette tables and slot machines, and a top-ranked chef. The other car is a sleeper. Both are available for only $20,000 a day each. Get twenty of your best friends together and for only $1000 each, you and your buddies can join in the raillery about railroads.

Deputy Green continued to entertain us until our train finally arrived. It would take far too long to repeat all of the information he provided. He did say he wanted to buy one of the $500 railroad passes so he could ride any rail line in the country for as long as he likes. We hope he gets a chance to do that someday and he can share his amazing knowledge about his beloved Amtrak.

Meanwhile, at least now you know all you ever wanted to know about Amtrak and the railroads. And if not, there is always Google and Mr. Green.