I’ve just finished listening to Erik Larson’s excellent book “Isaac’s Storm” on Audible. (For which, many thanks to the young lady at the Huntsville, TX Radio Shack who convinced me not to get another CD player but to go Audible). I’ve been meaning to read it for years.

Mine is not a review, but a recommendation to grad students and anyone planning to write history. I would suggest that our students and fellow writers consider Larson’s broader research methods and narrative history style. 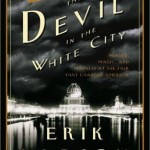 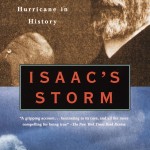 This book, as well as Larson’s “Devil in the White City”

about a serial killer in Chicago during the World’s Fair, provides an excellent training tool and guide for graduate students or authors who are carrying out research on dissertations, master’s theses, or any historical works.

Look at Larson’s Bibliography. Look at his sources. Look at the broad spectrum of information he included.

True, Larson describes the story of Isaac Cline and the details of the Galveston disaster, basing his research on the hundreds of eye-witness accounts at the Rosenberg Library archive. Many authors have done the same but Larson goes much deeper. He gives his readers information on meteorology, on ships and shipping, on the history of hurricanes around the world and across time. He helps us understand how hurricanes work, including details on pressures, wind velocities, waves and storm surges. He even discusses chaos theory. He delves into the creation of the Weather Bureau and the politics involved at its inception and studies the characters of the people who helped cause the disaster. By using so many sources, and moving between them with adept writing skill, he holds his reader’s attention through what might have been a mind-numbing info-dump of scientific and disaster data.

Larson also goes beyond his sources. As he says in an interview on the audio book, he is an historical journalist. As such, he feels free to “extrapolate,” “triangulate” and “animate” the history. He helps his readers feel, smell and see the disaster. I wish more historians did. Some of my colleagues in the academic field maintain that ‘if the sources don’t say it, you can’t use it.’ Larson, using Sanborn’s maps, could see that Isaac Cline walked past a sawmill, a coffee grinding store, and a horse barn. Therefore, he can argue that Cline would have smelled all of those things. The smells provide a reality that makes for good narrative history, and good history in general.

I would agree with Larson that historians are justified in stepping out of the restrictions of the sources and delving into the emotional world of what people might have been feeling at the time. History is, after all, about people: what they thought, felt and experienced. And it is up to historical writers of all kinds to bring history to life through our stories. All of it based on good research, of course.